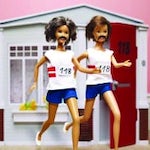 Together at 118 118, they oversaw a repositioning of the brand. Murphy had already launched an SMS information service which claimed to answer any question. Sports scores and weather updates were later integrated into its SMS offerings.

Soames also oversaw the launch of the kgbdeals.co.uk site, the company’s affiliate programme and managed advertising and sponsorship programmes with its creative and media agencies. He also commissioned comprehensive consumer insight programmes for the firm.

Murphy appointed ad agency Brooklyn Brothers to its £25m global ad account and ZenithOptimedia to the brand’s £14m media account. Work Club was chosen to handle its digital business. WCRS were the incumbent on the account.

One of 118 118’s most infamous ad since the switch saw Ray Parker Junior appear alongside the infamous droopy moustache men singing a 118 specific version of the Ghostbusters theme tune.

Alongside the advert an online game was produced where users could upload their own photos to replace the faces of the 118 118 men and dance alongside Ray Parker Junior to the Ghostbusters theme tune. In late 2009, the runners were then animated in new ads.

His role will be overseen by former TBWALondon managing director Jo Blundell, who joined the company as its first chief marketing officer at the start of the year. It is unclear if he will be directly replaced.