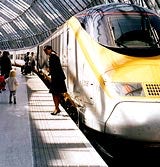 Eurostar, the Channel Tunnel train operator, has appointed TBWA to handle its &£25m pan-European advertising account, &£9m of which is spent in the UK.

The incumbent for Belgium and France was Young &amp; Rubicam, while UK advertising was handled by Y&R’s UK arm, Rainey Kelly Campbell Roalfe/Y&R. St Luke’s had been responsible for UK advertising until June 1999, when its contract expired.

From its offices in Paris and London, TBWA will create a pan-European campaign as well as local, tactical advertising.

The review did not include media, which in the UK is handled by Manning Gottlieb Media. However, the rail company is reviewing its direct marketing, which is currently handled by Rapier.