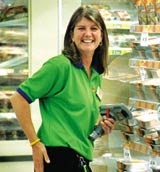 Asda has brought in media auditors as part of a review of its regional and local advertising arrangements.

However, a spokesman says that no decision has been made to call a pitch for the supermarket’s &£38.9m media planning and buying account held by Carat.

He says: “An audit is taking place that relates largely to local and regional advertising, something that we do from time to time. The reason this is happening is because we are doing more regional and local marketing.”

Asda is also having to adapt to a changing portfolio of stores. It is not only opening new stores at the rate of ten a year, adding to its current portfolio of 279, but is also trialling new formats. Among the new formats that are being rolled out are standalone George and home stores.

The spokesman adds: “We need to be a bit more tactical in order to compete in what is a more difficult market.”

There have been strong rumours about the strength of Carat’s hold on Asda’s media account ever since the departure of Aegis Media UK &amp; Ireland chief executive Mark Craze, who was known to be close to the business. Craze is now joint managing partner at Havas-owned Media Planning Group, which he joined earlier this year.