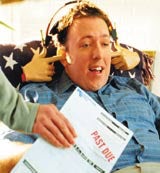 Internet bank Egg has been left without a senior marketing team, putting its &£40m brand and marketing spend in jeopardy. Mother handles the &£13m advertising account.

The Prudential-owned bank has now turned to headhunters for external candidates after Byrne asked her role to be downsized.

It is thought both men will join Toher at Mint, although a spokeswoman for the bank refuses to confirm or deny whether the appointments have been made. Byrne is believed to have requested to shrink her role to cover only corporate communications because of workload and family commitments, leaving a vacancy for a chief branding officer. At the time of going to press, nobody from Egg was available for comment.

A third Egg marketer, brand communications manager Richard Murphy, is moving to GE Capital, as director of advertising and customer communications. Prudential, which owns 79 per cent of Egg, is said to be looking for a buyer for the internet business, which sold its loss-making French division for &£96m late last year. The sell-off followed an earlier attempt to sell the whole of Egg.