TV producer Chris Dodd was taken aback when he spotted an unusual poster in the window of his local Sainsbury’s store in London. Dodd quickly concluded that the sign, which contained instructions for a ‘50 Pence Challenge’ in which customers were encouraged to spend a little more in store, was actually meant for staff eyes only and not to be emblazoned across the supermarket’s windows. So he did what any self-effacing British shopper does in these situations and tweeted a photo of the poster along with a suitably sarcastic response.

To the credit of Ross, the Sainsbury’s staff member who seemed to be managing the Twitter feeds, he did the right thing and (very casually) tried to find out where the offending store was located so the glitch could be corrected before it gained any more public opprobrium. But by then it was too late and a familiar sequence of events was already in motion.

Dodd’s tweet quickly sparked a small social media storm, with Sainsbury’s shoppers enraged by the supermarket’s attempt to sell them more. National newspapers and the BBC followed a day later. The final insult came from Lidl, which ran a copy-cat version of the poster as a half-page print ad but with a counter message that encouraged shoppers to save 50 pence by visiting one of its stores instead. 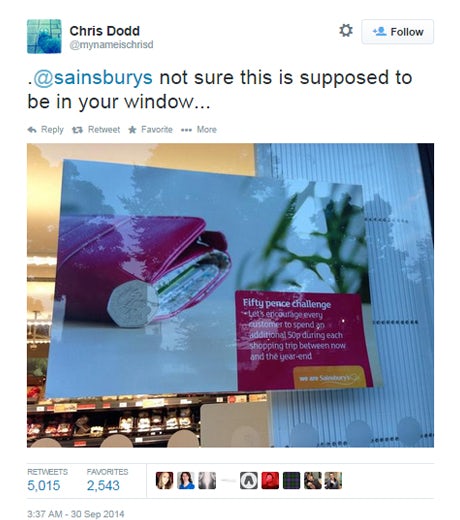 It was hardly a major faux-pas from Sainsbury’s. It’s always amusing when the internal marketing kimono slips for a few seconds and we get a glimpse of what is going on inside, but the whole thing passed by quickly and relatively painlessly for Sainsbury’s.

More interesting is what it reveals about a well-run business when it encounters market maturity. The supermarket giant has been gradually acquiring shoppers over the past decade with a superbly run marketing operation. But the high water mark of 17 per cent of supermarket shoppers has now dropped back slightly as the German discounters Aldi and Lidl attack from below and Waitrose from above. 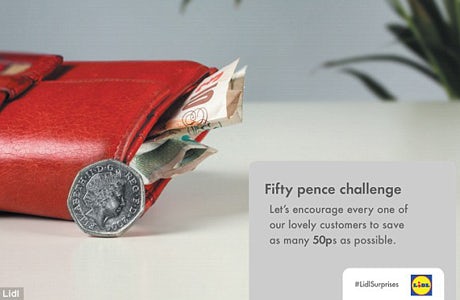 Faced with a flattening market share, the supermarket has a couple of options. Most organisations, hell-bent on increasing profits, assume that the solution is a new product launch. This is, of course, total balls. New products are bloody expensive to bring to market and most of them fail miserably while distracting your team from existing profitable businesses. Tesco launched a ridiculous number of new concepts, products and services during Philip Clarke’s tenure. It brought out tablets, banking services, cafés, its own line of branded ice creams and a cavalcade of other new products with very mixed results. No, new products are rarely the first place to turn when you seek growth.

Almost as bad is the alternative approach of selling the same product or service to new customers. Companies struggle and often fail in their international expansion attempts. Even Walmart was ultimately forced into a humiliating and costly retreat when it entered Germany entirely unprepared for the shitstorm that Aldi rained down on it from every direction. Similarly, Marks & Spencer has been launching and closing international stores for the past quarter of a century with the frequency of a drunken accordion player.

So for all the negative coverage and sniggering last week, I am entirely behind Sainsbury’s and its 50 Pence campaign. It might look less impressive than standing on stage holding a new widget or donning a metaphorical Viking helmet and announcing an invasion into some new, unsuspecting territory, but the reality of focusing on driving increased sales from the same service and the same customers is usually the better and safer bet. If, for example, Sainsbury’s teams can succeed with their 50 Pence Challenge they’ll generate about £130m in incremental sales growth this year.

Good marketers might be able to launch new products or into new markets, but great ones don’t need either. The deodorant brand that drove revenues by increasing the diameter of its nozzle. The razor company that encouraged its customers to shave their chests as well as their chins. And the supermarket that got each customer to add 50p to their weekly shop. Smart stuff, provided you don’t advertise it on the front of your window. So to speak.