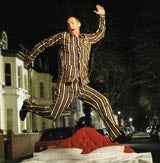 95.8 Capital FM is launching a television campaign to support the Johnny Vaughan breakfast show. The campaign, which has been created by Delaney Lund Knox Warren, shows Vaughan singing and dancing his way around London to the tune of Motown classic Dancing in the Street. Vaughan plays a variety of different characters to sing an adapted version of the song, which fits around the idea of ‘waking up the street’. Capital marketing director Carl Lyons says the campaign aims to show the different sides of Vaughan’s personality now that he has settled in to the show. The campaign breaks at the end of this week and in cinemas later this month. Media is through Zenith Optimedia.

Furniture retailer Habitat has hired RPM3 to create an advertising campaign promoting the chain’s spring/summer collection. It is believed that the agency, which has previously worked for collapsed chains Allders and Courts, has been hired to undertake project work for Habitat rather than as an agency of record. Habitat, which is controlled by the Ikano […]

Archers Schnapps bottles are to be packaged with a mini-CD created by Warner Music UK. The promotion is branded Hairbrush Divas Mix and has been developed from the Diageo brand’s sponsorship of Century FM’s Hairbursh Divas show.

King Of Shaves, the male grooming brand, is to sponsor British Winter Olympic gold medal hopeful Kristan Bromley in a deal believed to be worth &£1m. Bromley is the current World Cup and European bob skeleton champion and will be entering next year’s Winter Olympics in Turin, Italy. The extreme sport requires entrants to race […]