Above: British brands have a strong appeal to overseas consumers and some brands such as fashion chain Superdry are entering franchise agreements to expand their business into fast-growing regions

Marketers are not making the most of taking their brands overseas in spite of growing confidence in the UK – and they need to consider fast-growing economies in Asia, according to top brands.

“In the past, the UK has tended to export to ‘traditional’ or ‘mature’ markets like the EU, which have had the greatest prospect for growth in the short-term,” says Ritu Mohan, managing director at Boots Retail Thailand.

“As a consequence, less of a focus has been on larger, fast-growing markets such as Asia. The UK needs to tap into markets where there is demand for what it does best.”

Although the Boots brand originated in Nottingham in 1849, it is now part of Alliance Boots, which was established in Switzerland in 2008. It has around200 shops in Thailand where it is one of the largest pharmacy chains. Thai customers are particularly keen on its No 7 make-up brand, which was launched in the UK in 1935.

Other businesses of British origin should take note, and consider launching overseas or exporting their goods, according to a report by EY (formerly Ernst & Young).

“Now that confidence in the UK appears to be turning a corner, goods exporters must stop treading water and manoeuvre into the fast lanes towardsgrowth, mirroring the success of our most buoyant sectors, which have benefited from having very targeted export strategies,” says Mark Gregory, chief economist at EY.

Now that confidence in the UK appears to be turning a corner, goods exporters should move into the fast lane towards growth

UK goods exporters are lagging behind the wider UK recovery, according to EY’s study that has tracked international goods export data over five years.

Although the UK is the world’s sixth largest economy, it is the 11th biggest exporter in the world, according to OECD figures,and EY’s study forecasts just 0.3 per cent annualised growth year on year in UK goods exports to 2017, far behind the 1per cent European average.

What is more, the data also shows that growth in UK exports is forecast to be outpaced by import demand in nine out of 10of our fastest growing trade routes.

Looking to 2017, the automotive, engineering and pharmaceutical industries are all expected to lead growth in UK goods exports into new trade corridors, with a focus on high-end specialist products, such as those made by construction machinery manufacturer JCB, which exports 75 per cent of its UK manufacturing output and Rolls Royce, the world’s third largest maker of aircraft engines.

Under the agreement, three Superdry stores will open in Turkey, including two in Istanbul, by early next year, and at least eight throughout the agreement period.

“Turkey is a territory that has held our interest for some time and our partnership with Demsa Group offers the perfect opportunity to enter this diverse and growing market,” says Julian Dunkerton, the founder and chief executive of SuperGroup. 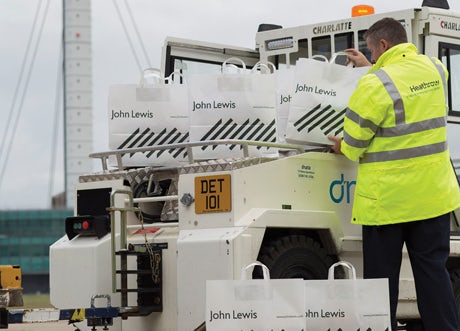 The announcement comes a month after SuperGroup revealed it was expanding in Asia with the agreement of a 10-year partnership with retail distributor FJ Benjamin. The brand is expected to open a host of stores across the region, starting in Malaysia and Singapore.

“We have a clear strategy to partner outside Europe with leading distributors in territories around the world to further internationalise and globalise the Superdry brand. This follows new partnerships with Demsa in Turkey and Reliance Brands in India,” says Dunkerton.

The department store has the ambition to enter another six to 10 markets over the next five to seven years, says director of commercial operations Sean Allam (see Q &A).

“Korea is a good market for European and international brands, a bit like Japan,” says Allam. “It has a healthy mix of home-grown and European brands, especially British brands, which do quite well.”

However, brands must also tread carefully when launching overseas and learn the lessons of companies such as Tesco, which withdrew its Fresh & Easy chain from the US in April, at a cost of £1.2bn. Analysts suggest the supermarket focused too much on its pricing strategy rather than putting customer service and quality first.

Meanwhile, Marks & Spencer closed 38 stores in Europe in 2001, although former chief executive Sir Stuart Rose called it ‘tragic’ that it had done so in 2010. However, it has since opened more than 400 stores in Saudi Arabia, Morocco and the Philippines.

South Korea is a good market for European, especially British, brands. It has a healthy mix of home-grown and European brands that do well

M&S has been part of a consultation with government body UK Trade & Investment (UKTI), which has launched a UK Retail Industry International Action Plan, to assist retailers looking to grow internationally.

It is focused on helping omni-channel retailers and luxury brands access international markets and supporting companies with market access issues and market and supply chain development (see figure focus, below).

It aims to deliver £500m in value to the UK economy byassisting up to 1,000 businesses with their international growth, by March 2015.

British brands, especially those made in this country, are veryattractive to foreign consumers, explains Fred Bassnett, retail sector specialist at the UKTI. “Britain, because of our standing in the world, has always had a heritage across the globe. We have more outstanding fashion designers – such as Jimmy Choo and Anya Hindmarch – than almost anywhere else in the world.”

EY’s economic advisory director Peter Arnold agrees: “Countries around the world buy into that heritage story when it comes to the UK. The Royal Family, London Beefeaters, it plays well to a lot of emerging markets. Some of the heritage brands can really link into that.”

A prime example of this is quintessentially British homewares brand Cath Kidston. Although no longer British-owned, it now has more stores outside the UK than inside and is poised this month to launch its first stores in Singapore and Indonesia after a 13 per cent jump in profits.

Another brand that is successfully tapping into this demand is Dartington Crystal, the last factory-scale manufacturer of crystal glass in the UK. In addition to Dartington crystal and glass products, the company also owns and markets the brands Caithness Glass and Royal Brierley Crystal and has two Royal Warrants.

The brand worked with UKTI to find export partners in both China and  South Korea.

“With Europe in its current state, if we were going to seek out export markets, it seemed an obvious thing to do to look at growth markets, such as China and India,” explains Neil Hughes, managing director at Dartington Crystal. The brand currently partners with department store group New World Department Store and Altavis, an importer of European wines in China.

“There are people in various markets who are targeting British brands. China is a typical example. In recent months we have hosted a number of delegations from China who are looking to attract UK retailers to operate in the Chinese market,” says Bassnett at UKTI.

Caithness Glass, which makes paperweights, is doing especially well in Shanghai, says Hughes. “It’s a glass paperweight made in Scotland. The reason they like them is that they’re hand crafted, Western and beautifully-made. They’re small, so make a great gift and are well packaged. Most luxury goods in China are purchased as gifts,” he explains.

In the last few months, the brand has also started exporting to  South Korea. “From what I know of the Korean market, British-made is hugely important, whereas in China it’s very much Western luxury goods,” says Hughes.

The company has also just announced that, courtesy of a fast-track scheme organised by the UKTI, it will soon be entering the Brazilian market -another of the UK’s fastest growing export partners – with its Royal Brierley brand.

This is a good fit for several reasons says Hughes. “It’s the glass that the Queen uses and it’s also used by the Prince of Wales, so we supply two royal households with the brand. We were the official supplier of crystal and glass merchandise for the London 2012 Games and, of course, the forthcoming Games are in Brazil. We also produce the gifts that the Football Associationgive to visiting international teams and football is huge in Brazil. 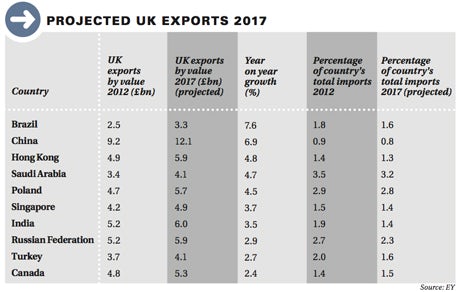 “We played all of these cards quite heavily. Combined with our drive and determination, come October we’re heading out there to engage with potential clients.”

Mohan at Boots says that entering new markets is not without its challenges and that UK brands thinking of exporting into new markets need to do their homework.

“The main challenge is getting your brand known and competing against established local and global brands. It is not easy to encourage loyal local consumers to try something new,” she says.

Last year, Boots announced plans to grow its portfolio in Thailand – where it is now one of the largest health and beauty pharmacy chains – by over50 per cent in the next three years from 200 to more than 300 stores.

“My key piece of advice is simple: do your homework on the market you want to enter,” saysMohan. “Time spent conducting research will hold you in good stead and takes the guesswork out. Look at what your competitors are doing and invest in consumer research. After all, understanding what your consumers want and need is key to your success.”

Boots does this by being customer-led, using insights and expertise to bring high quality health and beauty products to the consumer, says Mohan. Some of the insights are gained through the Boots loyalty card programme, specifically designed for the Thai market, which now has over 1million members.

With UK retailers online sales in the international marketsset to soar seven-fold to £28bn by 2020, according to a study by OC&C Strategy Consultants in collaboration with Google, international sales growth is predicted to dramatically outpace domestic activity online.

There is a big opportunity for UK businesses with the appetite to re-orientate themselves towards these markets and those that can, should get out there.

Britain’s 228,000 online retailers export more than the rest of Europe’s e-retailers put together.

A global study in conjunction with the Economist Intelligence Unit (EIU) found that over half (51 per cent) of UK firms report unclear, bureaucratic regulations as the greatest government-related obstacle to their operations in high-growth markets. 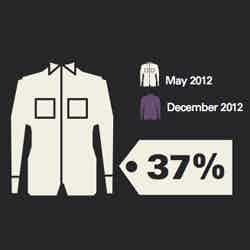 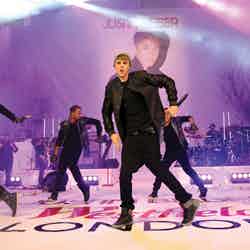 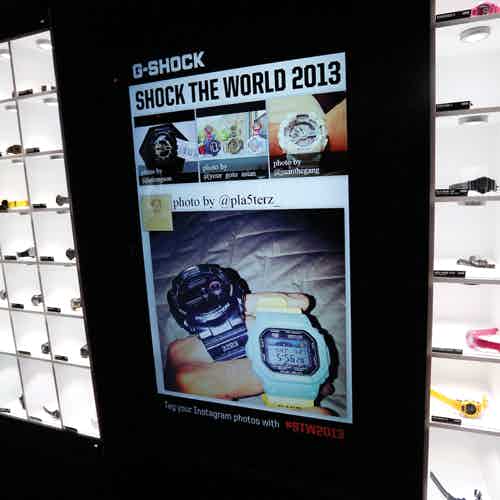 As outdoor technology continues to develop, brands are finding new ways to combine their experiential campaigns with digital marketing.