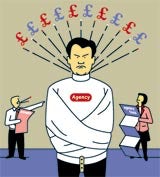 The relationship clients have with their promotional agencies has been described as being like a toilet window: clear but not completely transparent. In times when every penny counts, it is understandable for any company to question whether it is getting value for money from the agencies it uses, and if it could achieve the same results or better by spending less.

In the world of sales promotion, concerns over costs and spending can arise more often than in other marketing disciplines, simply because so many suppliers can be involved. Yet agencies are under increasing pressure to be more open and to explain to clients how they make their money from a promotional campaign. And, of course, how exactly the budget is spent. Clients that remain suspicious are employing companies, such as specialist international consultancy Firm Decisions, to audit agencies and to ensure they are complying with contract terms.

Firm Decisions has conducted audits in more than 40 countries and chief executive Stephen Broderick estimates that between five per cent and 40 per cent of any promotional budget can “fall through the cracks” at an agency. This is because agencies have misinterpreted some terms of a contract, or clients have a poor understanding of how their accounts are managed.

Broderick can reel off a number of areas where he says clients may be losing out. He says companies can be billed the estimated production cost for a campaign and not the final price, if that was lower, or charged rate-card prices for media buying rather than any discounted rate that might have been negotiated.

Broderick also claims agencies rarely compensate clients if junior members of staff work on their account, even though the fee negotiated was based on an agreement that senior managers or directors would be involved in the day-to-day mechanics of the business.

“Auditing is becoming more popular because clients are no longer prepared to accept that £5 or £10 will be added here and there. We advocate that promotions agencies should make a profit, but we are talking about transparency,” says Broderick.

“If we find a financial discrepancy, we identify the amount that should be returned to the client and the client decides if it wants the money back or not. One of our jobs is to put systems in place to ensure problems do not happen again. We would never recommend a client sacks an agency.”

Independent marketing consultant Kevin Duncan advises both sides on contractual issues and says everyone must take responsibility if it is unclear how any money is being spent or made. He believes agencies can feel compelled to pitch their fees too low and need to mark up the cost of certain items to cover their costs, while clients can be obsessed with selecting the cheapest agency.

“I always recommend agencies charge a premium price for a good job. That way they do not have to worry about finding money from elsewhere. Clients must understand that if they nit-pick on agency prices they will get poor, cheap work delivered by badly motivated people,” says Duncan.

This is a view shared by Paul Seligman, managing director at agency Communicator, who says it is clients that play hardest over costs, which tend to change agencies the most often and fail to build long-term relationships. “Historically promotional agencies have been underpaid, so they have tried to boost their margins by using mark-ups on print, premiums and other bought-in items,” he says.

“Some clients seem to resent this, but screwing your agency to the floor over costs is in no one’s interests, as it will look to save money elsewhere; perhaps by reducing staff levels or allocating more junior people to work on the account.”

Out in the open

In reality, promotional agencies are probably more open now about how they operate than at any time in the past. The policy of marking up prices obtained from third-party suppliers is not as common as it used to be, especially as more clients are setting up their own procurement departments to deal with contractors, such as printers and production houses.

Independent marketing communications agency Billington Cartmell is one company happy to be audited. It invites its clients, which include Vodafone, NestlÃ© and Royal Mail, to take part in two-way, six-monthly reviews so brand managers can measure whether they are getting value for money from the agency and its staff.

Billington Cartmell uses a costing system called Adnet, which helps clients to judge whether the time costs they are charged accurately reflect how long it took for a project to be delivered. “We do not have a problem being measured against a set of pre-agreed requirements, although clients need to understand agencies must make an income from their work. Agreed margin levels, either for time costs or for bought-in goods and services, must be workable for both agency and client,” says senior account director Ed Gray.

One of his clients is Carlsberg, which insists on transparency of pricing from all its suppliers. Marketing controller Adam Harris says if agencies have nothing to hide, they should not fear an audit.

“You would not manage your staff without regular appraisals, so it is right to manage promotional agencies in the same way. Ultimately we are looking for value for money, but we realise an agency must have a profit margin so we try to meet in the middle when reviewing costs,” he says.

Marketing Communication Consultants Association chairman Matthew Hooper says clients have a right to ask for a regular audit, as long as it is agreed when the contract is drawn up. The MCCA has renewed the format of its model contracts and these were sent to agencies in March.

“Agencies need to be better at communicating how they make their money, but clients have to understand why agencies might feel unhappy about being audited. There has to be an element of trust: an agency might have spent years building relationships with suppliers and have agreements in place that are commercially sensitive and should remain confidential,” he says.

The emergence of procurement departments within client companies and the rise in the number of audits taking place is a sign of the economic environment. Clients have a right to expect their promotional budget to be spent fairly and openly, but critics of auditing claim basing the strength of any relationship purely on statistics, such as the number of hours worked, can mean other factors are overlooked. They argue that a value must also be put on creativity and the emotional relationship that usually exists between the client and agency teams.

There is also a view among some agencies that the growth in procurement departments is actually damaging the creative process. “There’s a real danger that a client’s tendency to pin down and dictate the hiring of creative services will remove all the big ideas, innovation and sustainability from a relationship. Procurement also tends to strip out over-servicing and proactivity by an agency, because the typical response is to give clients only what they are paying for,” says Ian Millner, managing director of agency Iris, which has won new business from Sony Ericsson, Shell, Puma and T-Mobile so far this year.

It would be unfair to suggest that all clients are unaware that creativity comes at a price, just as much as any other element of a promotional campaign. Weetabix group sales promotion manager Jerry Higgins says an agency’s capacity for strategic thinking and originality is always high on his wish list. “This ingredient is as important as the chemistry between us and the agency. But we need to be able to measure its understanding of the brief within an agreed budget and deadlines,” he says.

According to one sales promotion executive, the industry is so competitive that agencies have to be transparent or they will struggle to win business. “If clients are still surprised at how they are being charged, they must have been asleep during meetings with their agency,” he quips. Or perhaps they were otherwise engaged and staring out of that murky toilet window when the financial details were discussed.