A backdrop of new five-year highs for both UK and US stock market indices was a helpful factor. However, there is mounting evidence that specific sentiment towards the media sector is on the turn – having been negative for a protracted period.

Given that many UK media companies have substantial international operations and that non-UK media companies are confronting many of the same opportunities, threats and challenges as those in the UK, it is not surprising that UK institutional investors pay considerable attention to what is going on in other markets.

In previous months, I have highlighted the mounting level of private equity interest in media companies as being an indicator that media valuations could be bottoming.

Given that the typical investment horizon for a private equity investor with regard to seeking an exit is three to five years, interest from this source in an industry such as media, undergoing structural change typically comes ahead of the fund managers of listed shares, with the latter frequently requiring more evidence of positive momentum before investing.

In any event, any lingering doubts of private equity’s interest in acquiring media assets was laid to rest in October with the news that Clear Channel had received an approach from a private equity consortium comprising Providence Equity Partners, Blackstone and Kohlberg Kravis Roberts (KKR).

Clear Channel, with a market capitalisation of $18bn (£9.5bn), is best known in the UK for its leading position in the outdoor market, whereas in the US it is a major player in both radio and billboards.

Readers of Barbarians at the Gate, which told the inside story of one of the most (in)famous buyouts of the 1980s – RJR Nabisco – will recognise KKR, although in keeping with present sensitivities, it too has decided to have a makeover in recent years.

The Amazon review of Barbarians at the Gate relates the story/ “With a stake of $25bn, the battle for control of RJR Nabisco in October and November 1988 became a symbol of the greed and power-mongering of the 1980s. This gripping narrative reveals the truth behind a Wall Street gamble that sent shockwaves through the international business world.

“The rules were simple: never pay in cash, never tell the truth, never play by the rules. All the suspense of a first-rate thriller – one of the finest, most compelling accounts of what happened to corporate America and Wall Street in the 1980s.”

Buy-and-build approach
Compare and contrast this with Yahoo! Finance’s description of today’s KKR: “The barbarians at the gate are now knocking politely. The master of the 1980s buyout universe, Kohlberg Kravis Roberts, has shed its hostile takeover image for a kinder, gentler, buy-and-build strategy.

“In short, KKR assembles funds from institutional and wealthy investors to buy low and sell high. An active investor, the firm supervises or installs new management and revamps strategy and corporate structure, selling underperforming units or adding new ones.”

Either way, KKR is a serious player and Clear Channel is a seriously large media company. It also appears that KKR’s approach has given rise to further interest, with US broker Sanford Bernstein commenting in a research note that “other groups have quickly scrambled to get into due diligence mode. According to sources, the timing of this auction is moving at an unusually accelerated pace.”

Closer to home, one of Germany’s largest commercial broadcasters, ProsiebenSat1 Media, has been in the spotlight as the formal process of effectively auctioning a major stake in the business has begun.

Silvio Berlusconi’s Mediaset has already announced its interest, although – bizarrely – there are signs that despite us all being part of a happy European federation, there is German reluctance to countenance the former Italian prime minister having a major say in one of Germany’s largest TV companies.

Although in this case the seller of the stake is a consortium, including a number of private equity players, it seems likely that the eventual buyer list will include new private equity buyers prepared to take the baton.

The UK’s very own leading commercial broadcaster, ITV, has been under the spotlight for a long time, although largely for the wrong reasons, with the latest news being confirmation that it is in very preliminary talks regarding a possible combination with NTL. I thought it worth calling a fund manager who has followed the fortunes of both companies over many years to get an initial opinion on the prospect of these two coming together. Sadly, the line was poor and therefore details of his preliminary analysis were lost, although I did pick up words including “two”, “drunks” and “bar”.

As well as the stimulus to sector performance of corporate activity, there are signs that industry fundamentals are firming up. In the US, where quarterly reporting is more entrenched than in most European markets, a new “results season” is underway, with companies as diverse as News Corporation, Interpublic and US domestic outdoor company Lamar reporting solid numbers, in line with or better than expectations.

Change of Fortune
Although there is still little evidence of an improvement in certain areas of the UK market, The Local Radio Company’s trading update being a case in point – “trading continues to be challenging and there are currently no signs of recovery in the sector” – the body of evidence that a bottom in the media sector’s fortunes has been reached appears to be mounting.

The IBIS Capital Media Indices
IBIS Capital is a corporate finance advisory and investment business focused on the media sector.

The IBIS Capital Media Indices are a set of proprietary analytical tools developed to monitor the UK media industry from the perspective of the share price performance of publicly listed companies.

The indices group companies with similar business models into sub-indices. The indices also include a split between media companies fully listed on the London Stock Exchange and those listed on the Alternative Investment Market (AIM).

Methodology
The indices monitor all UK media companies listed on the London Stock Exchange and on the AIM with a market capitalisation over £10m. Some companies included are listed overseas or have split listings.

Indices are based on the market capitalisation of each constituent company but, in common with other recognised stock market indices, they make a number of adjustments. 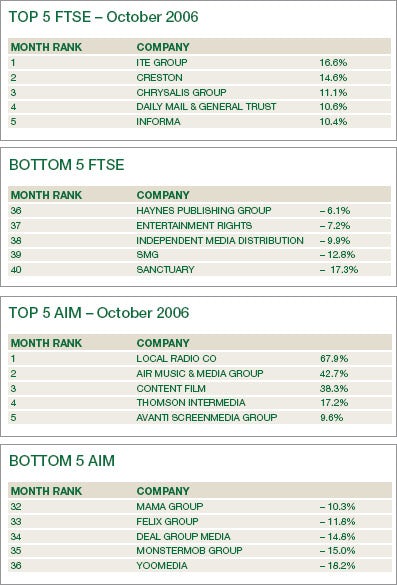 The resurgence in the 2006 DM Agency Reputation Survey of those agencies that are named after founders or established partners reflects a growing client preference for accountability and tried-and-tested value, but the emphasis is very much on ‘teamwork’. David Reed reports.

Fast-food chain Burger King will stop making ads aimed at children and will no longer advertise during kids’ TV programmes in the UK from the end of the year. The burger chain’s announcement comes ahead of an expected clampdown on “junk food” advertising by media regulator Ofcom. The regulator is meeting this week to decide […]

Oiling the cogs of integrationwhich tends to mean meetings, with my agency colleagues or conference calls with clients none of my clients are based in London so Ive become very adept at building relationships over the phone.