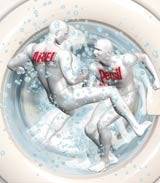 Like two veteran pugilists called once more into the ring, Procter &amp; Gamble (P&G) and Unilever are again lining up for the next round in the fight for control of the laundry detergents market.

With P&G looking lean and competitive after almost a decade of restructuring, and Unilever wrestling with lower than expected sales growth and its own internal rejig, now might be the perfect opportunity for P&G’s Ariel to challenge Unilever’s Persil.

Victory is far from certain. Persil has clawed back a substantial lead in the detergents market, despite having almost collapsed following the clothes-rotting Persil Power disaster in 1995. At the time, many wrote the brand off as a lost cause, and even Unilever chairman Niall FitzGerald ominously declared “no business can justify itself on history”.

In 1997, Ariel had capitalised on Persil’s misfortunes to take the lead with a 52 per cent share in the detergents market, according to figures from Taylor Nelson AGB, with Persil languishing at 24 per cent. But in the 12 months to May 2003, IRI data shows that Persil has regained its market-leading position with a 28.8 per cent share, way ahead of Ariel’s 20.3 per cent.

Unilever on the ropes

There has been a shift in fortunes at a corporate level during the same period, but here, ironically, it is P&G that looks to have shed excess pounds and got into shape, while Unilever has languished under the heavy load of its many brands. P&G appeared bloated and fragmented five years ago, but a 1996 pledge to double sales within a decade began a major global restructuring exercise.

The arrival of Alan Lafley as president and chief executive in 2000 saw further cost-cutting and assets sales. The restructuring finished in December 2002 and the benefits are being felt. Net income jumped from £1.76bn in 2001 to £2.62bn in 2002.

Unilever is still struggling with internal restructuring of its own. The company slashed its sales growth target last week for its 400 top global brands to four per cent for 2003, from a previously expected figure of between five and six per cent.

Unilever is continuing to offload brands and is expected to sell another tranche of its business – including Brut cologne and Mentadent toothpaste – to a US private equity house for £183m this week (MW last week). But despite a target to reduce the number of its brands from 1,600 to a core 400, Unilever had only reached 750 brands at Christmas, causing some insiders to wonder if the company has dropped off the path to growth.

As one analyst says: “P&G’s restructuring has energised the company. The focus is now on key strengths, core products and innovation. P&G has a value growth of mid-to-high single digits, which is good for a mature market. Unilever is still going through internal restructuring to cut costs and non-core brands.”

Insiders at P&G also say the company is hungrier for success than ever before. Gary Coombes, marketing director for fabric care in North Europe, says: “I believe that P&G is in a better state than it has been for many years. It is a more efficient, creative business.”

And P&G is turning its newly honed corporate muscle back to detergents for the next round in the decades-old “soap war” with Lever FabergÃ©. Nearly eight months ago, P&G told retailers that it wanted to lead the category in one year. But only now is the company’s strategy starting to unfold.

P&G is planning a £20m relaunch of Ariel in September, with a reformulation that promises to improve stain removal by 30 per cent (MW last week). The brand will also be repositioned as a premium product, moving directly against arch-rival Persil.

One household goods buyer believes that Ariel’s relaunch is the biggest thing to happen to the range for a long time. He says: “It is going to be massive for Ariel. The brand really needs a kick up the backside to break out from its static customer base.”

Industry sources say there are also grand plans in January for P&G’s detergent portfolio, although details remain sketchy. One insider says that P&G could be the next to launch a single-dose powder product, similar to the own-label dissolvable powder sachets launched last week by the Co-operative Group (MW last week).

Coombes is bullish about Ariel’s future, as well as the more downmarket P&G detergents Daz and Bold. He says P&G’s laundry portfolio grew 1.5 per cent in the fiscal year to July 2002 to a 49 per cent share of the detergents market. This year, P&G expects this figure to rise to more than 50 per cent, following indications of growth in every brand.

Coombes says the turning point for Ariel was the “Taking a Load Off Your Mind” advertising campaign created by Saatchi &amp; Saatchi in 2000.

“Successful brands have an emotional connection and this was the first time that Ariel moved away from technical talk in advertising to make that connection. The campaign was the turnaround for Ariel, helped by new products.”

Coombes promises that consumers can expect “much more in the way of innovative products”, but adds the cornerstone of future success will be “making a deeper emotional connection with our customers”.

But it is this connection that industry sources fear could hamper Ariel’s challenge to Persil. They say that Ariel is 20 years too late in trying to appeal to the hearts, rather than the minds, of consumers. As one insider puts it: “Persil has been making the emotional connection with British housewives since the Sixties, so it is a bit late in the day for Ariel.”

The strength of this consumer connection helped Persil bounce back from the Persil Power disaster. One household goods buyer says: “There are not many brands that could come back from Persil Power. Ariel is the better product technically, but no one notices the difference. I don’t think P&G can do anything against Persil – the brand name is unbeatable.”

He recommends that P&G plays to its strengths by utilising and promoting brands such as Daz and Bold, as well as building on its under-exploited Fairy range.

Watson says: “We launched our liquid capsules after P&G launched theirs and still managed to take two-thirds of the market within three months. This demonstrates the strength of our brand equity and advertising. Persil is still the most trusted brand.”

Lever FabergÃ© has not just relied on its invaluable brand loyalty. There has been a multi-million pound streamlining of Persil over the past six months. Non-performing lines such as Black Velvet have been replaced by innovative launches, including a £7m “fizzing formula” relaunch of its Biological Performance powder, an aloe vera range and an upmarket revamp of Persil liquids.

An industry source says: “Persil is winning the race. P&G has lofty ambitions for Ariel but, if anything, it is losing ground.”

With both brands striving for the same emotional connection, the speed of innovation will be key. Tim Seaman, managing director at own-label manufacturer Robert McBride, says: “The UK consumer is something of an innovation junkie.” He knows better than most, having beaten Lever FabergÃ© and P&G to launching one-dose liquid and powder capsules for the Co-op.

But Seaman warns that developments are slowing in the mature detergents market. “Convenience is the key driver for growth, which comes through innovation. But this is now at the margins, so there are unlikely to be major changes. There are functional launches in Europe – such as washes for jeans and whites – but these aren’t major drivers.”

The title fight between the two laundry heavyweights can mean that smaller contenders are ignored. Seaman says that these companies can bring out new products faster than the larger rivals because of “the requirements that a corporation has to meet, both internally and externally.”

Aquados chief executive David Macauley agrees. “Big business can be slower to innovate,” he says. “Their way forward is to acquire smaller companies that have developed niche products to compete.”

Aquados was the first to launch a dissolvable powder sachet at the beginning of 2002, and is expanding distribution into Tesco (MW October 25, 2001). Macauley predicts it should achieve a ten per cent market share with “relative ease” as the product works better, is more environmentally friendly and is cheaper than Persil and Ariel.

Macauley says that consumers in the UK are “always looking for something fresh and different”. He, too, sees Lever FabergÃ© as the hungrier of the two industry giants.

Persil, it seems, has been trimmed to its most lean and profitable form. Ironically, says one analyst, the parent Unilever corporation has some way to go before it can claim the same.

“But,” he says, “it shouldn’t take long for Unilever to get it right and, in the meantime, products like Persil should see them through.”

This sentiment is shared by most of the industry. P&G talks a good game, and looks in good shape, but there is little it can do when the public’s trust of a brand goes beyond clever advertising or product innovation.

Over the past decade, the jostling at the top has seen the lead lost then won again by Persil. Although Ariel might put up a good fight, the odds are still in favour of Lever FabergÃ©’s housewives’ favourite.

Skips, the KP Snacks brand, is to sponsor a new spinning rollercoaster ride at Tussaud Group’s Chessington World Of Adventures in a &£1m multi-year deal. The ride, which opens next year, will circle the theme park’s Land of the Dragons section.

Scottish detergents manufacturer Aquados has appointed Faulds to work on its first advertising campaign. Faulds will be allocated a budget of about &£2m to work on the campaign, which is to coincide with a nationwide roll-out of the Aquados detergent range. Aquados chief executive David Macauley says that he has asked Faulds to devise a […]

Dunnhumby cinnamon has been appointed by Hyundai Car UK to handle the direct marketing account for the launch of its new Terracan 4×4 vehicle.