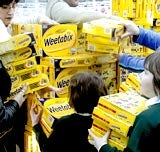 According to Feng Shui, the ancient Chinese theory of environment and energy flows, it is impossible to feel a sense of wellbeing in any room where there is clutter, while messy surroundings can create confusion and lead to mistakes.

These observations were first made 6,000 years ago, yet they remain relevant today, as the surge in Western interest in the doctrine testifies. And Feng Shui principles would certainly not be out of place in the point-of-purchase (PoP) manuals of the UK’s powerful grocery chains, which are once again getting tough on what PoP activity they will allow in their stores.

Supermarkets’ policy on PoP material is core to their in-store marketing activity. They want to avoid cluttering up stores with display material, especially that which may have a negative effect on their own brand image, or could make customers feel uncomfortable. They are also aware that the promotional campaigns for their own-label products could be overshadowed by PoP material relating to other campaigns.

Sainsbury’s has revamped its extensive PoP handbook outlining what will and will not be allowed, while Asda has been forced to review its PoP rules after a number of brands pushed the boundaries of its guidelines by producing PoP material slightly bigger than was permitted.

Safeway, meanwhile, has become exasperated with certain brands using their own field teams to implement PoP material at local-store level without authorisation from the chain’s head office. Now, it controls all displays through its marketing division, which has a team – the Check and Correct Force – which visits every store to ensure displays are erected correctly.

“Branch managers are responsible for implementing PoP displays, but we want to ensure the highest standards. Managers are issued with a manual each month containing details about forthcoming activity, such as the start and end dates of any campaign and where PoP items should be located,” says Safeway spokeswoman Emma French.

Suppliers’ practice of using field teams to visit local stores to promote the benefits of displays to managers has arguably prompted the “get tough” approach. Senior buyers at the supermarkets’ head offices are desperate to maintain a consistent brand message and achieve total compliance at branch level for campaigns with central authorisation.

Retail solutions company Storecheck Marketing is soon to publish the results of its 2001 survey of 120 grocery store managers from Asda, Sainsbury’s, Safeway, Somerfield and Tesco. The survey reveals how the supermarkets view their own ability to implement the PoP activity agreed by their head office.

Last year’s report, conducted with research company Retail Marketing Services, revealed that the lowest level of compliance was for free-standing display units, an area where Asda and Tesco performed best with 66 per cent compliance, while for Sainsbury’s the figure was 64 per cent. Brands supplying items such as headers, shelf trays and hanging signs could expect a slightly higher success rate with an average compliance rate across all chains of almost 67 per cent. In this area, Sainsbury’s store managers performed best, while those from Safeway and Somerfield trailed badly.

Perhaps worryingly for the PoP industry, these results demonstrate that more than 30 per cent of the display material that is sent to supermarket branches is probably not even being unpacked.

There are several reasons why items are not sited and 85 per cent of managers taking part in the Storecheck survey blamed a lack of space. They also criticised assembly instructions and the clarity of the briefings they received from their own head offices.

It is worth remembering that incentive schemes, based on the expected sales increase that any activity is likely to bring, are in place to encourage supermarket managers to comply, while most chains run reward schemes for staff offering prizes for the best display or sales uplift at an individual branch.

“What we are seeing is retailers charging for a chain-wide promotion but not delivering. This is because decisions made centrally are not always implemented locally. It means brands are not getting the results that they are paying for,” says Storecheck Marketing sales and marketing director Colin Harper. “Yet the reality is that branch managers will never have enough in-store labour to comply 100 per cent, and they will always be sent more display material than they have room for.”

A tight hold on the reins

Tighter controls and the possibility that, even if a display does meet the supermarkets’ strict criteria, there is no guarantee it will be sited at all, means a brand’s national accounts team must find alternative ways to improve their chances of success.

The only way manufacturers can be sure that all branches have complied with a head office directive is to employ their own field marketing team to visit individual outlets, but this can be an expensive process.

Cadbury Trebor Schweppes is one company employing a tactical merchandising team. The team constructs displays on behalf of branch managers. “This is a worthwhile process for us because we know we are maximising our investment in PoP, while it keeps the retailer happy because we are meeting its guidelines. It is also one less job the store manager has to worry about,” says Cadbury Trebor Schweppes display manager Paul Clarke.

Many PoP agencies believe campaigns should always be agreed with the retailer’s head office. This is so as to achieve the consistency that the brand, the retailer and ultimately the consumer will respond to. “Manufacturers need a sound commercial proposition to sell to head office, but they also need to sell the idea at branch level to get the compliance they are ultimately paying for. The buyer, the branch manager and the staff all need to be convinced of the commercial benefits of the promotional items,” says Neil Halford, business development director at PoP company, Artform.

In fairness, manufacturers are beginning to accept they will rarely achieve 100 per cent compliance for their displays. In response, they are beginning to invest extra money in developing more creative PoP displays. This, they hope, will ensure that they continue to receive the support of those key supermarket branches that have complied with previous campaigns.

The strategy appears sensible in the light of data by market research company AC Nielsen. For the past ten years it has tracked the revenue streams from individual stores and found that more than half of all packaged goods in the UK are sold by less than 700 individual branches.

Creativity remains the core ingredient in any recipe for getting PoP material accepted centrally and locally. Yet with all the guidelines and rules put in place by the grocery chains, there is a risk that innovation and imagination in the PoP industry could be stifled.

To avoid this, manufacturers and agencies need to establish a close relationship with retailers. PoP company Dialogue worked with Asda to generate a strong profile for its client Weetabix. It produced the Weetabix “Has Your Teacher Got The Balls To Win?” giant cereal bowl and spoon challenge for 24 Asda stores, to support the chain’s “Big Eat”, healthy eating campaign.

Teachers from local schools were invited to step inside a large transparent dome to discover if they were “withabix” or “withoutabix” – depending on how many winning balls they could scoop into a funnel in two minutes.

“This idea worked because it was developed with Asda and we were tapping into something that already had internal clearance from head office. There were numerous meetings beforehand to adapt the dome for in-store use and we worked with Asda’s local PR team to get local schools to take part,” says Dialogue director Nick Tappin.

A brand that has a good national accounts team, which is in regular contact with key supermarket chains, should be able to avoid the worst-case scenario where a retailer will snub display material, which has inevitably been costly to produce.

Mike Hughes, commercial director for agency CPM, says manufacturers must be realistic about what goes on within the large store groups. After all, they are people-driven businesses stocking tens of thousands of products, most of which require PoP support. “If items are not used, it is not that the supermarket doesn’t want to use them, but more likely the material does not fit the chain’s image or the display is just too complicated,” he says.

Fords Design chief executive Martin Law, says it is vital that manufacturers do their research, although he feels the retail market in the UK is more difficult than in the US or elsewhere in Europe because of the power that the big supermarket chains wield in the UK.

“We all know that good PoP support increases sales, so to ensure everyone is happy we will always have three-way meetings between ourselves, the brand and the retailer. This is to ensure that there is plenty of time to adapt a design if necessary,” he says.

The relationship that field marketing companies have with the grocery chains through their day-to-day activities means they are often asked for advice on how to ensure strict PoP regulations are met.

Despite their tough stance, the supermarkets accept they need branded PoP material to boost category sales which would suffer if only their own-label products were promoted in store. Yet, the sheer volume of items being produced means controls have had to be put in place to avoid the kind of chaos in store which would make any ancient Feng Shui guru turn in his grave.