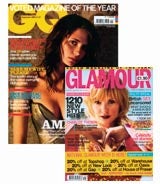 It’s a decade since Loaded first hit the newsstands to give men a taste of top-shelf titillation alongside popular culture once a month. At the time, the idea men would religiously buy such magazines each month to satisfy their urges seemed optimistic at best. Yet Loaded spawned a raft of “me-toos” and the sector burgeoned.

However, recent years have been far from kind and owing to lack of innovation, the once booming sector has been floundering. So it was unsurprising that scepticism greeted the launch of men’s weekly titles earlier this year from IPC Ignite! and EMAP Consumer Media. But media pundits have been proved wrong.

Not only have Nuts and Zoo Weekly reported a combined figure of almost 500,000 copies a week in the latest Audit Bureau of Circulation (ABC) figures for January to June 2004, but they have helped to extend the market. The entire men’s sector has grown by 23 per cent during the six months and 26.3 per cent year on year to 2.56 million copies per issue. Experts say the two titles not only attracted new readers, but also helped boost incremental purchase by encouraging men to buy more than one magazine.

As Periodical Publishers Association director of marketing and communication Philip Cutts points out: “The total half-year sales for the sector have more than doubled year on year to 24 million.”

The buzz and excitement of the men’s weeklies is set to continue. Zoo, with a circulation of 200,125 compared to Nuts’ 290,337, is tweaking editorial content and is to increase its sports coverage in a bid to intensify the battle between the two titles.

Let’s hear it for the boys

The two titles will have to battle it out with more entrants to the market. H Bauer launched Cut – a digest of the week’s news aimed at men – last week. And the industry waits with bated breath for Richard Desmond’s Northern &amp; Shell to launch a “men’s alternative” to OK! – thought to be called KO! Rumours are rife that Desmond’s weekly will sell for just 15p – which could trigger a price war.

IPC Ignite! group publishing director Eric Fuller says: “The weeklies certainly have had an impact, but the fact that the monthly market remains so buoyant is testament to the sector’s resilience. For years we had been criticised for not innovating enough and Nuts has done exactly that. It has revolutionised the market, encouraging male readers to complement their monthly titles with a weekly read.”

Media buyers maintain that a clearer picture will emerge only when the initial wave of price promotion and advertising settles down. Cut, which is being distributed free to all retailers, will be promoted at 50p for the first two issues and is being supported by a television ad campaign created by Mustoes.

The sectors that, according to MediaCom’s press director Steve Goodman, have performed poorly include teenage magazines and traditional women’s weeklies.

The teen lifestyle sector is down 6.9 per cent year on year and 1.9 per cent period on period. Hachette Filipacchi’s Sugar suffered declines of 9.6 per cent and 1.1 per cent respectively. The only winner in the category is Cosmo Girl, which has a circulation of 200,168.

The women’s weekly sector has been in the doldrums since the rise in popularity of celebrity titles. Woman and Woman’s Own dipped by 6.1 and 7.9 per cent year on year respectively. Goodman says that although the likes of Take a Break, Woman and Woman’s Own can still boast large circulations, advertisers are concerned by the ageing readership of these titles.

Although the celebrity sector continues to benefit from successes such as reality television show Big Brother, most titles showed a slight decrease in their circulations. But EMAP’s Closer shows that interest in celebrity is far from waning. Closer gained 24.7 per cent period on period and 43.5 per cent year on year rising to 480,187. Market leader Now, published by IPC, extended its lead as the biggest-selling weekly celebrity title, despite a slight overall fall in sales. Heat also suffered a blip and has settled to 540,556 copies a week.

They’ve had their day

Louise Matthews, managing director of EMAP Entertainment which publishes Heat and Closer, says: “Traditional women’s weeklies have reached a saturation point. They seem to be pale imitations of each other, whereas celebrity titles are genuinely doing something different. Even though we raised the cover price of Heat this year, it continues to be EMAP’s most profitable title. It will be interesting to see what the launch from the National Magazine Company will have to offer.”

NatMags is planning its women’s weekly launch sometime next month. The title is expected to be celebrity-focused but targeting a more mature readership (MW June 3).

Also waiting in the wings is a monthly from Condé Nast. Called Easy Living, it is expected to shake up the thirtysomething market (MW May 6). The title, backed by a &£15m investment, is to be launched sometime next year. Easy Living is thought to be a younger version of NatMags’ Good Housekeeping.

In the women’s lifestyle and fashion sector, Good Housekeeping is the fourth-largest title and grew 0.5 per cent in the last six months to 417,893. The sector is dominated by Condé Nast’s Glamour, which is the highest-circulation glossy in the UK with a circulation of 605,747 a month, rising four per cent period on period and five per cent year on year. Cosmopolitan trails with 456,447 – it fell by 1.2 per cent year on year and 0.9 per cent period on period.

Marie Claire, which experimented with a new format this month, seems to be bouncing back with increased circulation: up 5.5 per cent period on period and 1.1 per cent year on year to 380,760.

Starcom MediaVest group press director Ian Tournes says the women’s market has experienced innovation only in size and price: “The sector needs a point of difference to attract new readers. The product needs to be different rather than just adding to market clutter.”

It is not only the losses but also the triumphs, like the astounding success of the men’s weeklies, which will compel publishers to expand the market.

Companies are beginning to spend more on corporate events, but they want tangible results. The pressure is on for organisers to create events to remember while proving it is money well spent. By Victoria Furness

Fish4jobs, the online recruitment website owned by Newsquest, is looking to appoint its first marketing director.

You may have noticed a slightly smug atmosphere in this week’s magazine, and that’s because Marketing Week has been the object of some not-very-subtle praise from one of its peers in the publishing industry. While other magazines and newspapers were receiving large helium-filled balloons shaped like numbers such as ‘5’ and ‘7’ through the post, […]