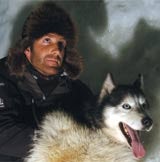 After reporting the safe return of “marathon man” Dom Robertson last week, the Diary challenged the marketing world to beat his feat of endurance, and in Guy Grieve, it’s found someone who comes pretty close.

Tired of his Edinburgh-based job in sales and marketing, Guy gave it all up to spend a year living in the Alaskan wilderness. With the nearest village a two-day, cross-country trek away from his cabin, Guy had to endure minus-50 degree temperatures and braved the constant threat of wolves and bears.

His year of ice-olation was sponsored by Highland Park single-malt Scotch whisky, and Highland Park ambassador Gerry Tosh says: “Guy’s determination to take on the elements and total respect for the extreme conditions presented an ideal synergy with Highland Park. The malt is made in the dramatic setting of the Orkney Islands, shaped by centuries of extreme conditions.” Tosh by name…

Guy attributes his survival to his trusty husky dogs, which saved his life on more than one occasion. However, that doesn’t explain why, as pictured, he was using them as ventriloquist’s dummies.