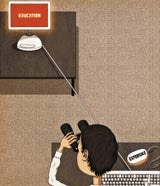 But as your career in the industry progresses, building your skills usually means learning on the job. There is a widely held belief that everything you need to know about sales promotion can only be learned through doing it, either as a promoter or in an agency. As one agency head says: “On the job training is invaluable and no qualification can replace it.”

We don’t need no education…

While there is much truth to this view, it does a disservice to the education and training offered by the Institute of Sales Promotion (ISP) and the Marketing Communications Consultants Association (MCCA).

It also runs counter to the growing demand for professionalism in the industry. When surveyed for last year’s Marketing Week Sales Promotion Agency Reputations Survey, clients rated the quality of account handling at 3.8 out of 5, equal with the quality of creative thinking. Without proper training, achieving that quality will be hard. Equally, agencies want to work with clients that have a thorough and structured understanding of their job.

What is evident is that new recruits to the industry will not come fully formed. “As an employer, the training qualifications held by a prospective candidate are not the sole criteria that I look for,” says Mercier Gray managing director Rob Gray. “Ultimately, you recruit someone who is intelligent and will learnquickly, with a ‘can do’ attitude.”

The pace and demands of sales promotion make this outlook essential, but it does also have to be backed up with some formal knowledge. After all, there are specific laws and guidelines that have to be adhered to, especially if a promotion is aimed at children or involves tobacco or alcohol.

And, increasingly, old-school sales promotions are being replaced by multi-disciplinary promotional marketing. The MCCA’s name change from its former incarnation as the Sales Promotion Consultants Association is evidence of that.

“We have real problems trying to find people who can operate across disciplines,” says Gray. “Often we find people who’ve worked in one type of agency and are expert in sales promotions or direct marketing, but they don’t know about the others.”

Academic institutions are struggling to cope with these changes, but attempts are being made. Luton Business School, under the guidance of Professor Angus Jenkinson, has recently launched a degree in integrated marketing, while Buckingham College offers a course in integrated creativity.

For promoters and agency staff who have left college, such moves are too late. Their only option is to take further education. Fortunately, the range of schemes available has become broader and more sophisticated than ever before.

Randle Stonier, chairman of the ISP and chief executive of Skybridge, points out: “The promotional marketing landscape is changing so fast that the need for continuous development and training is mandatory.”

In September, the ISP launched a personal membership programme to recognise the professional achievements of practitioners. Qualification is based on proven and certifiable achievements in the industry. “In addition, approved academic qualifications in marketing are an important component,” says Stonier.

This is an important extension of the options available to individuals, but it does not replace the core qualifications. The ISP Diploma is now in its 20th year, while the lower level certificate is four years old.

Chris Bestley, educational consultant to the ISP, says: “The syllabus evolves all the time. The structure of the modules has been developed over the years in line with what agencies and promoters tell us they want. We’re continually making improvements.”

Part of this evolution has been the creation of the ISP Diploma study notes. Unlike other marketing disciplines, sales promotion is lacking in serious textbooks. The Manual of Sales Promotion by John Williams, first published in 1983, is a seminal book, as are works by Julian Cummins and Chris Brown. But with the exception of a specialist volume by Philip Circus on the legal aspects of sales promotion, few other UK publications are to be found.

Through the involvement of the diploma’s tutors and speakers, the ISP has access to what Bestley describes as a “taskforce which is responsible for putting the content and structure together. They are not precious academics and they shouldn’t be. They are out there doing it, learning and keeping up to date.”

What should not be overlooked is the fact that the diploma is administered in a rigorous, academic fashion. It takes four-and-a-half months to tackle 20 detailed questions, a multiple-choice section, and a response to a live brief. The ISP claims it takes about 60 hours to complete, although many of those who have taken it say that it takes twice as long.

“I don’t think that the diploma is a particularly easy course,” admits Bestley. It is also carefully policed – at least five people have been disqualified in the past five years. But this does not appear to be a deterrent. From about 70 candidates in the late Eighties, the number of people taking it rose to 320 in 2002.

But not everybody has the time – or inclination – to pursue such a course. For that reason, the ISP has introduced in-house training programmes. Already used by 141, The Marketing Store and J Walter Thompson, these provide a bespoke set of tutorials covering the issues that the agencies want their people to learn about.

As promotional marketing evolves, so does the administration of training and education. A prime example of this was the way the ISP recently linked up with the Institute of Direct Marketing to provide cross-disciplinary training for Leo Burnett London.

The programme delivered 15 modules to junior and middle-level teams, covering classic sales promotion and direct marketing issues as well as digital marketing and customer relationship management. Having successfully run the course for these two levels, the agency is now planning a training programme for its senior staff.

One of those at Burnett to have taken the course was communications director Annuraag Trikha. She says: “The course is designed to train a traditional above-the-line advertising manager in skills that normally specialist direct marketing or sales promotion agency managers would have.”

By bringing the two skill sets together in one programme, she learned how to take a core brand idea “and apply it in the most consumer-relevant way across all possible consumer-brand contact points,” says Trikha.

Communicating in their language

While the ISP has been trying to meet the demand for integrated and media-neutral training in this way, the MCCA has focused more on the business and communications skills side of marketing. It offers courses covering account servicing and account direction, as well as creative training.

MCCA director Scott Knox says: “We have designed the first ever set of training courses aimed at developing work skills, account handling, and creative and planning skills. All are non discipline-specific and for more than just juniors.”

To encourage continuous learning among agency staff, the training programmes are linked to the MCCA’s recruitment service. “If an agency recruits a person through our Talent Pool, part of that fee is put into a training account and can be redeemed against our training,” says Knox.

Most agencies and promoters continue to recommend the ISP Diploma to staff who are keen to develop their skills. At Birmingham-based agency KLM, director Dave Richardson says that training is one of the reasons candidates are tempted away from its London-based rivals.

“We have a mentoring system here, because the biggest problem people face is trying to complete the diploma while working in a busy agency. Left to their own devices, they will wait to the last minute and try to cram the work into the last two weeks,” he says.

In addition to this, the agency has extended its training programme beyond what industry bodies can provide. “We’re trying to integrate our clients into the training programme. So an agency person working on a client account will have a better level of understanding of how they work and vice-versa,” says Richardson. Recently, Diageo was involved in this joint training of the agency and client teams.

What is evident from such developments is that training and education has come a long way. Not long ago, students took marketing degrees, got a job with a promoter or agency, discovered what they had learned had little relevance, and rapidly learned what they really needed to know by doing it.

These days, it is not possible to leave things to chance. Structured training is part and parcel of improving service levels, as well as contributing to staff stability. That is why courses can be administered through distance learning or in house, covering discipline-specific needs or cross-disciplinary activities. Everything from digital to data is now covered.

Not that potential students should be afraid of the shock of the new. According to the ISP’s Bestley: “There is a core of techniques that tend not to change. Nobody has invented a new one for 15 years.” So if you are an established practitioner who took the ISP Diploma years ago, your knowledge is not as out of date as you might have feared.