Brands are adapting and transforming, internally and externally, to become increasingly customer-centric. Whether it is content, internal transformation or getting customers involved in the brand story, putting the consumer first is vital to successful marketing.

This customer-centric approach has given rise to major trends in marketing, including disruption, emotive storytelling, user-generated content and diversity. The brands at the forefront of these trends will be sharing their experiences at the Festival of Marketing next month.

“Marketing activity that doesn’t start with the customer in mind can only be for vanity and will not deliver desired results,” says Mark Evans, marketing director at Direct Line Group.

For Evans, taking this approach means the organisation’s digital investment and capabilities are targeted and therefore more valuable to customers. Despite sector stereotypes, the brand was recently recognised in a global Harvard Business Review poll as the most empathetic brand on Twitter.

At the Festival, Evans will be speaking about why digital transformation needs to take a customer-centric approach. He acknowledges, however, that the key challenge for marketing  is to unify the brand promise all the way through the organisation. “Without this, a brand cannot consistently deliver its promise to consumers. Therefore, it is critical to ensure that every aspect of digital transformation is aligned to the brand promise,” he says.

Being customer-centric is arguably not new but the process is constantly changing, so it is not just the brand promise that needs to be taken into account. Digital tools allow marketers to make campaigns, products and services more relevant and timely for consumers but the proliferation of this content also means that consumers’ attention is in high demand.

The Multichannel stage will look at the idea of creating a consistent brand voice in a world where consumer device usage and interactions are difficult to track. James Breeze, head of marketing operations at O2, will talk about joining up customer touchpoints, while Benefit Cosmetics’ UK & Ireland marketing director Hannah Webley-Smith will share a results-driven case study showcasing why a multichannel campaign should be about the customer.

The role of user-generated content (UGC) is also gaining prominence as brands bring customers to the fore. Tom Malleschitz, CMO at Three, says: “People who are delivering, commenting and creating UGC are thinking more about the brand, they have an opinion. It could be good or bad, but it doesn’t matter as what you want is an emotion.”

Three claims its use of the hashtag #DancePonyDance within its 2013 ad, featuring a pony dancing to ‘Everywhere’ by Fleetwood Mac, was a UK first. Its success spurred the brand on to use the same approach with its #SingItKitty and #HolidaySpam campaigns encouraging consumers to react on social media using the hashtags.

“The biggest enemy for a brand is neutrality,” adds Malleschitz.” If you are indifferent, people are not laughing about you, feel nothing about you and don’t even want to comment or think about you.”

Embracing UGC is the theme of Malleschitz’s talk at the Festival as Three continues its quest to “own the space of trust and transparency” in its sector, but there are challenges in authenticity and ensuring a positive response from consumers (see Q&A, bottom).

One of the reasons that Three began it’s consumer-focused brand work was because “the mobile industry sucks and the trust isn’t there”. Arguably, it is also why other industries are seeing smaller players and challengers disrupting the market.

An example of a disruptor is the founder and chairman of Atom Bank Anthony Thomson, who is opening the second day of the Festival. People may know Thomson’s name as he is the founder of Metro Bank, the first bank to open on the high street in more than 100 years. The move was disruptive to an industry that has experienced little change over the decades, and with the launch of Atom Bank later this year the disruption is set to continue.

At the Festival, Thomson will tell the audience why he started Atom Bank, why marketing matters and whether strategy or culture has been more important on the journey. He sees culture as a vital part of ensuring the bank does not behave like a bank and focuses on being a customer-led business.

Gett is another challenger taking on a saturated market: on-demand taxi apps. Its rebrand from Get Taxi earlier this year enabled the brand to innovate and branch out to other industries, which has seen the brand deliver champagne in 10 minutes. It launched a new service this week called Gett Salad.

Remo Gerber, CEO of Gett in the UK and Western Europe, will take part in a panel at the Festival titled ‘Riding the back of the data revolution: Disrupting the megabrands in data driven markets’.

He believes that competition is a strong driver for innovation, but being new to the transportation sector means the brand “looks at things with different eyes”. The internal set up of a brand and building a culture of innovation are also key. “It’s cliché but you need to develop a team that constantly asks itself ‘is this the best we can do? Can we do better? How can we be different?’,” he says.

Technology developed by startups also allows marketers to look beyond the brand to innovate and disrupt industries. Rose Lewis, co-founder of startup accelerator Collider, who will be speaking on the Tech Trailblazers stage, believes that to drive innovation internally brands need to look to existing startups. She says: “We find the people within organisations who see problems, and have to do something about it. This is how innovation penetrates a business and sometimes senior management must look outside in order to move forward from within.”

When Absolut Vodka launched its app Silverpoint earlier this year it was looking for a return on engagement rather than a return on investment, according Adam Boita, head of marketing at Pernod Ricard.

Emotive storytelling was key. Partnering with Punchdrunk and agency Somethin’ Else, Absolut’s app let users solve a mystery around a character that had disappeared by unlocking clues that featured Andy Warhol’s rarely seen Silverpoint drawings. Boita says: “People engaged with our game for more than 2.5 hours across two weeks because we captured their imagination and provided a campaign that allowed them to escape and be entertained.”

He admits that storytelling is nothing new but that “the challenge lies in finding the balance between engaging with the campaign and making sure the story is woven in, rather than getting in the way”. Boita adds: “It’s a fine balance to make a compelling game mechanic, weaving in the story and finally integrating the brand in a truly compelling way while maintaining creative integrity.”

Otto Rosenberger, CMO at Hostelworld, is also speaking about this topic and says it is important to talk about emotion over function. “Brands need to understand the emotional story that binds them and their customers together and engage their customers in that story. This means moving away from pure sales and push marketing, towards intelligent content communications,” he says.

As more brands share stories, particularly online, authenticity and transparency become paramount. Closing the Festival on a social note will be Monica Lewinsky, who will share her experience of being involved in a political scandal at the height of a changing media landscape. Her objective is to change the culture of shame and humiliation in the online world but it also provides a warning for brands.

Learning from these experiences will be key as the power of the internet to make or break reputations applies not only to public figures but to brands too. Lewinsky will share her thoughts on reputation management and rehabilitation, and defending against and overcoming public shaming and humiliation.

As more brands see the external effect of greater diversity in advertising, and the internal benefits of ensuring brand teams reflect society, the importance of diversity in creative industries continues to rise.

There are positive stories to be told, including Jemma Jones, department manager, marketing communications at Honda Motor Europe Ltd. She says: “Although the stats paint a different reality of the business world, gender inequality does exist in some companies and sectors. However, I’ve had quite a positive experience.”

Jones says that some people are “surprised” on hearing that she works for Honda because the sector has been traditionally male dominated. However, as one of Honda’s key management principles is ‘respect for the individual’ she says she has “never been held back” because she is a woman.

Jan Gooding, group brand director at Aviva, is another highlight in the diversity debate. As the chair of the LGBT equality charity Stonewall, and an executive committee member of WACL, Gooding is well placed to take part in a panel at the Festival on championing diversity in the workplace.

Radio 6 presenter Lauren Laverne also takes the stage at the Festival. She recently launched The Pool with former Cosmopolitan editor Sam Baker, which is an alternative online platform featuring articles, video and audio aimed at women.

For more information about the Festival of Marketing and to buy tickets visit www.festivalofmarketing.com.

Customer-centricity is a key theme at The Festival of Marketing this year but at mobile phone network Three it is vital as user-generated content (UGC) features high on the agenda.

Why did three go down the UGC route?

We started experimenting with UGC in 2013 when we changed our approach to communication. We thought, ‘if we can create emotion, is there an opportunity where people start to share content because they are so engaged?’

With [our latest ‘Make it Right’ campaign] we tried to engage with employees. It was so important for us to get our 2,000 people in retail and 6,000 in the contact centres over the line. [We used] a different form of engagement where we invited the employees to generate content.

Why did you get employees involved?

As a company, [we are] people first, then brand – it’s the two major components we obsess about.

If you generate an environment where people feel comfortable and are inspired about a purpose – [in this case] to make it right – you generate something positive.

What are the biggest challenges in UGC?

You have to have an emotional story. If it’s not engaging or emotional it’s difficult to expect there will be UGC and you get a lot of cynical replies.

The story should dictate the communication tools you want to use. We have stories where we need to create something personalised to spread the word, some we can run on social with a hashtag and others on billboards.

Companies [tend to do] it the other way round, thinking we need a hashtag because it’s cool, but when it lands no one is interested. It doesn’t feel authentic and nobody wants to share it. 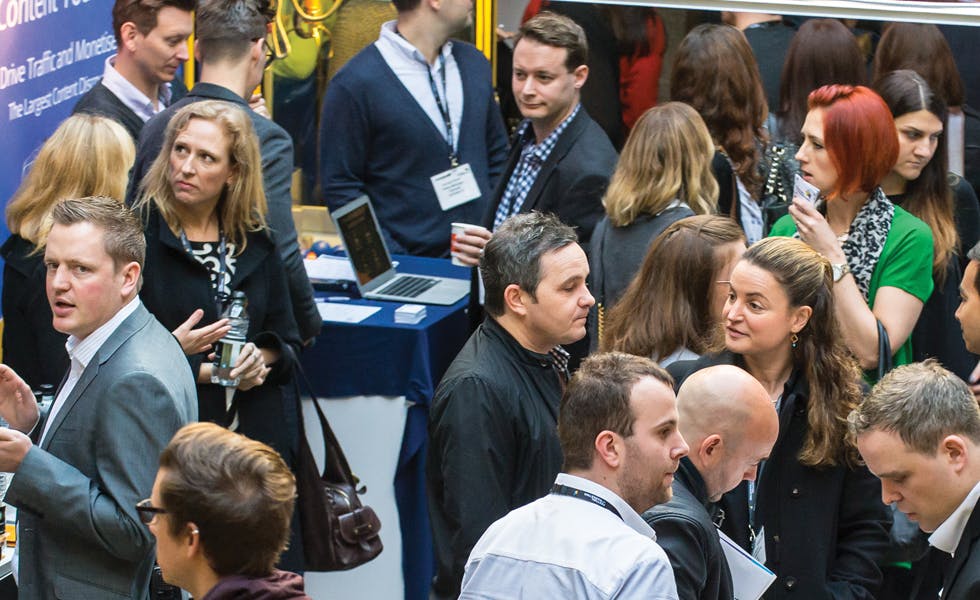 With 200 speakers across 12 stages, the two-day Festival of Marketing boasts a packed schedule so choosing what to prioritise is a tough task. To help you navigate, Marketing Week has selected 10 not-to-be-missed sessions that tackle the big issues marketers are facing today.

New Balance’s CEO Robert DeMartini admits the brand had unintentionally “become older” but says a renewed focus on its performance business will help it become more relevant to younger consumers and shake off its image as more of a lifestyle brand.