Of course, it’s not just down to the toys themselves to do the talking. Now is the time for marketers to step up to the mark and make digital marketing count. But it can’t be just one way or another – the need for integration will continue to be key.

Watching the complaints of many observers reflecting the year ahead on TV over the festive break, it struck me that social media really has changed the ways we interact. Sites like Facebook have become sacrosanct for communicating and micro-blogging on sites like Twitter has become an almost everyday occurrence. Stephen Fry withdrawing from the site is evidence of just how much it can take over a life.

This week, we see the BBC spin off its soap opera EastEnders onto the PC screen. E20 will look at the lives of some of the characters away from the usual weekly television broadcast. It’s by no means a unique concept – other hits like Coronation Street and Heroes have also done similar – but it’s a sign of recognition for how digital can interact with offline media.

While social media may have been blamed for making the noughties the decade where artificial behaviour took over from normal social behaviour, it doesn’t have to be the end of it. We are after all in the 21st century.

So, its time for us to recognise where the big audience advertising screens are and really thrive on the possibilities – from social media to video-on-demand and the growing arena of mobile advertising (which is about to see a whole new Apple v Google v Microsoft battle). Even display looks likely to mature beyond its current state.

Digital agency Tangent One tell me they have created what is believed to be the world’s first ‘smart banner’ campaign, designed to dynamically contextualise the creative and take the targeting of online advertising to another level – watch this space.

It’s a multi-tasking heaven out there and digital has the ability to reach hearts and minds everywhere. Let’s make this the decade when consumers are fascinated by the marketing methods presented to them – by relating to them and enabling their participation. It’s time to stop shouting, and time to start listening. Good Luck!

Bra firm Shock Absorber is launching a print and online advertising campaign this week to support the launch of its new range of sports-specific bras. 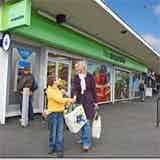 More retailers have reported buoyant sales over the Christmas period with The Co-operative Group, House of Fraser and Poundland seeing good trading over the festive period.

Dunnhumby, the market research company that created Tesco Clubcard, has bought KSS Retail, a US based shopper behaviour tracking firm.