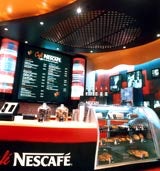 The boundaries between traditional product-based packaged goods brands and service brands, such as retailers, are becoming increasingly blurred, with many manufacturers now offering a combination of products, services and experience.

At the same time, Henkel, the German detergents and personal care company, unveiled plans to provide butler-style personal services to cash-rich, time-poor consumers. It has teamed up with London-based lifestyle and home management company tenUK to roll out the service, to be called tenDE, in the UK and Germany (MW June 28).

For &£1,500 a year, members will get a personal lifestyle manager, who will provide services such as holiday planning and dog walking.

Unilever and Henkel are not alone in trying to build brand loyalty by extending their scope. Amoy, Cadbury Trebor Bassett, Premier Foods and Tetley have all become service providers.

Cadbury launched Café Cadbury, a chocolate-themed café, in Bath this year to test chocolate drinks and a new range of snacks in the high street. The company is still monitoring sales at the store but says early results are encouraging.

Premier Foods opened T Fresh, a Typhoo tea bar with a modern feel, in the Millennium Dome. But in the six months since the visitor attraction closed, Premier has remained silent about the outlet’s performance or prospects for its future high street presence.

Unilever Bestfoods is still stewing about whether to roll out its Ch’a tea shops. The Brighton store, which opened on a short lease in 1999, closed this year. But a second outlet is still open in Bristol and the company has opened a third, smaller tea bar at Windsor Royal railway station. The Windsor outlet is branded Lipton Ch’a to raise the profile of the Lipton brand in the UK.

“We are still testing Ch’a in different concepts and formats,” says a Unilever spokeswoman. “These things take a while to fine-tune.”

Unilever is one of the most active packaged goods brand owners experimenting with service concepts – along with Ch’a and Myhome, it has also rolled out Lynx barber shops (MW August 24, 2000) to raise awareness of the personal care brand by the same name.

Tea-maker Tetley GB launched Gaffers, a themed café based around the company’s cartoon “tea folk”, in Manchester. The store served snacks and Tetley tea and was decked out in blue and white fittings, including tea folk coats and slippers.

But the outlet, launched as a pilot to aid Tetley’s understanding of tea’s potential in the retail sector, closed in February. The company blames its location in the basement of the Manchester Royal Exchange and says the concept is not written off. Tetley is talking to potential partners about opening a chain of tea shops, which could be branded Gaffers.

But Richard Perks, senior retail analyst at Mintel Corporate Intelligence Group, is sceptical about ventures that take manufacturers away from their core business.

“The move of packaged goods brands into ‘bricks and clicks’ is aimed at establishing a niche outlet. But if these compete with retailers, it means competing with the brands’ main customers,” he says.

Perks dismisses the idea that changing the central premise of a brand from a product to a service could generate big revenues. “This kind of brand extension is more of a brand-building process than anything else,” he says.

Henkel admits that moving into personal services is a “daring step”, but the company believes it is likely to be a profitable one, in terms of revenue and increased customer understanding.

Ralf Heine, director of e-business development at Henkel in Germany, who is also responsible for the tenDE venture, says: “We believe it is potentially a source of revenue for us, just like some of our biggest brands.”

Henkel is now looking at taking the service model into other areas of its business. It is understood that Schwarzkopf &amp; Henkel, the UK personal care division of the consumer goods company, is talking to potential partners about supplying services such as hairdressing.

Neil Broome, managing analyst at Datamonitor, says the thinking behind these ventures is to “move away from being a faceless manufacturer towards a more intimate relationship with a consumer”.

But one industry insider believes personal care manufacturers are being forced to extend their offerings into the service industry because of increased competition from retailers: “The threat is not only from their own-label products but also from schemes such as customer loyalty cards and service-oriented portals, all of which are building an intimate customer experience for high street consumers.”

Developments in the café sector are also intensifying, with several manufacturers entering the race and hoping to attract customers away from coffee-culture outlets such as Starbucks.

Last week, Coffee Republic admitted trouble may be brewing for its coffee chain. The company scaled back expansion plans after announcing it is unlikely to post a profit for the current financial year.

By contrast, Nestlé says its Café Nescafé is full of beans. Nestlé has now opened 44 franchised stores across England in high streets, hotels and shopping centres. The company is “pleased” with the chain’s progress, according to a spokeswoman.

She says: “It’s part of our strategy to increase out-of-home coffee consumption. Café Nescafé was never really intended to target any other chain’s customers: it was mainly to see how popular the idea would be.”

“What Henkel seems to be doing is opportunity-driven, while something like Café Nescafé makes perfect sense. All these are great ideas, but whether they work or not remains to be seen,” he says.

As we increasingly become an “on the go” society, pressure is mounting on the manufacturers to bring their products and services closer to the consumers.

But with so many brands jostling for space on the crowded high street and intensified competition coming from Internet services, some companies are unlikely to capture the attention of today’s busy consumers.