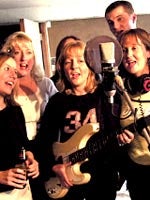 Nothing was able to put the dampners on a staff outing for IPC Media’s corporate communications and presentations teams when they decided to turn pop stars for the day and record a CD.

At a studio in deepest Greenwich, the “popsters” quickly realised there wasn’t a budding Ronan Keating or Mariah Carey among them.

But the team, including director of corporate communications Julie York, were unabashed.

Despite the pouring rain, the IPC optimists decided to ignore the appropriate Travis track – “Why does it always rain on me?” – in favour of recording “Perfect Day”.

Although a series of solos were abandoned in favour of safety in numbers, there were a couple of star performances. Paul Phillips, editor of the staff newsletter In Magazine, fancied himself as David Bowie, while events manager Kimball Stewart did a mean Lou Reed impression.

PR manager Vicci Moyles says: “We have a stack of CDs to give away to family and friends for Christmas presents. But we fear they could end up as tea coasters.”

You said it, Vicci.