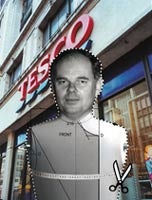 The appointment of John Hoerner as chief executive of clothing at Tesco has triggered a supermarket clothing war. Hoerner is a former chief executive of Arcadia, which owns several high street chains including Burton, Top Shop, Dorothy Perkins and Miss Selfridge. He is charged with convincing customers that Britain’s market-leading supermarket is a great place to buy clothes as well as groceries.

While the industry remains divided on the wisdom of bringing in Hoerner, who left Arcadia under a cloud last year after his acquisition strategy failed to pay off, the appointment has certainly rattled some of Tesco’s competitors.

Asda, the undisputed leader in supermarket clothing, issued a defensive statement the day after Tesco’s announcement, declaring that its George clothing range is “formidable and accelerating rapidly” with like-for-like sales growth “in double digits”.

Asda is to employ an extra 2,000 staff to help expand the range, which was created by former Next boss George Davies, in a bid to attract customers from across the age spectrum.

Sainsbury’s has meanwhile signed up Jeff Banks to produce a Jeff &amp; Co range of fashion. It also has a deal with independent retailer Adams to put childrenswear in some of its stores, although the company says its primary focus is still food.

In contrast, Tesco, which recently launched a semi-formal clothing range under the Florence and Fred brand, has declared it wants to enjoy the same dominance in non-food areas as it does in the grocery market.

But Tesco has some catching up to do – it has less than one per cent of the British clothing market, compared with Asda’s 2.6 per cent. The question is whether the former Arcadia boss is the right man to give Tesco the fashion edge it needs. Hoerner effectively replaces Graham Ash as Tesco’s head of clothing. Ash was reportedly the brains behind the Florence and Fred brand. He is understood to have resigned without a job to go to.

Originally from the US, Hoerner was brought to the UK to run Debenhams, then part of the Burton Group, in 1987. He is largely credited with breathing new life into the department store chain by concentrating on key areas such as fashion clothing, toys and accessories. Ten years later Debenhams was demerged from the Burton Group, and the rest of the group was renamed Arcadia, with Hoerner as its chief executive.

In 1999 Arcadia paid more than &£150m for a portfolio of fashion retail chains, including Wallis and Miss Selfridge, from the former Sears empire. The move contributed to the group’s &£153m loss for the year to August 2000.

Hoerner was forced out of Arcadia in November last year after his repeated attempts to restore the group’s prosperity had been unsuccessful.

Since April, Hoerner has been advising Tesco on its strategy to become a leading force in the non-food market, offering input on everything from supply chains and merchandising to marketing and in-store presentation.

Analysts agree that buying the Sears brands was “a big mistake” but say that Arcadia’s good progress since Hoerner’s departure is largely due to measures he put in place, such as the closure of underperforming stores and streamlining the business by selling and discontinuing brands.

Retail Intelligence analyst Richard Perks says that Tesco’s main task is to turn its clothing range into a distinctive brand, as Asda has done with George.

He adds: “Whether Hoerner is the right person for that I am not sure. He did fantastic things at Debenhams: he got the right people in and he got the business moving. That is why Tesco asked him to come in and help out. But he was unable to repeat that success at Arcadia.”

SG retail analyst Nick Bubb, while acknowledging Hoerner’s “chequered past”, says he is a “talented guy, and someone who can add value to Tesco”.

Some in the retail industry question how Hoerner will cope with the transition from being in charge of the country’s second-largest clothing retail group to a position where he will not even be on the board, and will have to report to Richard Brasher, Tesco’s head of non-food operations.

One industry source says: “It will be interesting to see how Hoerner gets on. He is used to being the boss and getting his own way, but he won’t be in that position at Tesco.”

The new man may not have much choice. Another insider says Hoerner, who at 61 had already passed Arcadia’s normal retirement age, may not have been inundated with job offers when he left the group.

“I don’t want to knock him, but the fact is that Hoerner did not have a job when he left Arcadia. [Working for Tesco] is better than being a consultant.”

Richard Brasher argues that Hoerner has the right experience and credentials to take Tesco’s clothing operations onto a higher level.

“We are not as successful in clothing as we are in other areas of our business. We are very fortunate that he has agreed to work with us. He is at the stage of his career where he has nothing to prove,” he says.

While Tesco’s clothing range lacks the brand recognition of Asda’s George, the company has doubled the sales of its clothing retail business to &£320m in the past five years. The Fred and Florence range is now available in more than 350 of its 692 stores.

Unlike Jeff Banks and George Davies, Hoerner does not design clothes, and will not add a recognisable name to the clothing range.

But Brasher claims that branding is not so important in a supermarket that is already used by more than half of the UK’s population.

He says: “Branding is something that a lot of people talk about, but if you can find the right range of clothing – in the right style and at the right price – branding becomes less important.”

Sally Bain, senior analyst at Verdict, predicts that both Tesco and Asda will increase their share of the clothing market, hurting Marks &amp; Spencer and squeezing middle-market retailers such as Bhs and Littlewoods.

“Tesco has started to look hard at its clothing range and it is really going for this market. But Asda is not going to stand still,” says Bain.

Although discount retailers such as Matalan (MW May 17) have proved there is demand for discount clothing in out-of-town stores, analysts warn against a half-hearted approach to clothing and say supermarkets have to realise they will never supplant the high street fashion retailers.

“If you are going to offer clothing, you have got to do it like you mean it. I don’t think there is room for just a little bit of clothing in the corner,” says Perks.

Perks also questions the logic behind Asda’s announcement that it is to extend the George range to cater for teenagers and older people, as well as producing an outsize range.

“That sort of thing is dangerous – you can lose focus. You can’t be all things to all people. George is a reasonably well-focused range, it is great for kids and their mothers but it is not the place for teenagers to go shopping for their clothes.”

But Andy Bond, managing director of George, says the new initiatives have been introduced to cater for the supermarket’s broad customer profile: “every week 8 million shoppers come to Asda. We want to make sure that we have clothes to suit all of those customers.”

At the moment, only 13 per cent of Asda shoppers regularly buy their clothes from George.

While he declines to comment on Hoerner’s appointment at Tesco, Bond says: “We have 11 years experience of selling clothing. Tesco is not so far up the learning curve.”

He adds: “The issue for anyone running a supermarket clothing business is to understand how to sell clothes in a mixed retail environment. I am sure that will offer both Hoerner and Jeff Banks some interesting challenges.”

Asda denies the departure of George Davies last year will dent its progress in the clothing market. Davies has now been signed up by M&S to design a new range for young women, called Per Una.

Sainsbury’s launched Jeff &amp; Co in 19 of its 440 stores in May and is rolling the concept out in another six outlets this month.

The range, which is slightly more expensive than its rivals, is sold in special concessions decked out with wooden flooring and stainless steel, and trained staff are on hand to offer style advice.

A spokeswoman for Sainsbury’s says the chain’s number one priority is to offer quality food, adding: “We aim to offer non-food goods in our larger stores where we have the space and where it does not interfere with our food range.”

Clothing is an attractive proposition for supermarkets because non-food items yield a higher margin than food sales. Verdict Research predicts that between 2001 and 2005 non-food sales will rise 24 per cent compared with 15 per cent for food.

However, it is unlikely that smaller supermarket chains will follow in the footsteps of the big three.

And Waitrose marketing director Mark Price says his company has no plans to introduce clothes. “Our shops tend to be small, so by nature they focus on food. However we are part of John Lewis, which does sell clothes.”

With the UK clothing market becoming increasingly competitive, the only way for retailers – whether supermarkets or high street outlets – to significantly increase sales is by stealing their competitors’ market share.

As a result they will have to work even harder to develop their image, branding strategy and customer service.

The grocers may have the upper hand when it comes to convenience – a factor which is instrumental in attracting their core customer base of families with young children – but it is debatable whether they can rival stores like New Look and Matalan in terms of up-to-the-minute style.

As the country’s most profitable retailer (profits in the year to February topped &£1bn), there is no doubt that Tesco is well placed to make serious inroads in the clothing market. Whether Hoerner is the right man to help the supermarket realise its ambition remains to be seen.

In the year since BrandNet first assessed packaged goods brands’ online presence, some have improved dramatically, embracing the Net’s potential. Others have failed to improve and still do little to enhance their brand proposition. So who are

Channel 5 is to broadcast an interactive version of its daytime game show, “100Â¥ produced by Pearson Television.