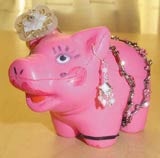 As the first week back after the festive period tends to be the most depressing of the year, the Diary has been thinking of how it can bring a little enjoyment to its readers’ lives. Ideas ranged from a free ten pound note with every issue of Marketing Week to starting a petition to prevent French and Saunders from recording another Christmas “special”, but the outright favourite was to show a selection of squeezy stress pigs dressed up in strange costumes.

The pigs come courtesy of Pigsback.com, which is running the Pimp Your Pig competition as part of a feature for online printing service Snapfish.

Each month the best five pigs are shown on the website, and the “pimpers” are given 250 redeemable “PiggyPoints” as well as being put forward to win a digital camera. The Diary’s entry, John Prescott, was sadly disqualified on the grounds that it was unfair on the pig. Fortunately it had taken little work to transform the pig into the Deputy Prime Minister.