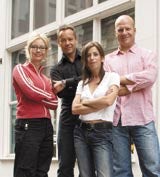 A quick straw poll before this story begins: how many of you are aware that Pop Idol is still on TV? Hmm. Thought so. You’ll appreciate, then, the difficulty faced by Mercier Gray, which has won the account to launch the computer game of the series. To seal the deal, the agency team was invited to visit ITV’s ideas nerve centre, where the concept of making another series was first mooted. Don’t they look pleased?