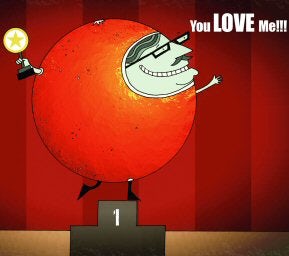 Boiling a frog requires patience. You place one in a pan of cold water, then very gently increase the heat. Long before it reaches boiling point, the amphibian will have passed away, without ever leaping out of the pot in alarm at the rising temperature.

Much the same thing could be said to be happening to traditional promotional marketing agencies. Without realising it, their environment is undergoing major changes which could lead to their demise.

Evidence for this can be found in this year’s Marketing Week Promotional Marketing Agency Reputations Survey. Of this year’s top 30, just 18 were among those highly rated by clients a mere four years ago. Even since last year there have been six new entrants.

Non-conformity rules
It is notable that most of the agencies on the rise do not conform to conventional notions of what an agency in this sector should be like. The seemingly relentless march by Iris, for example, to claim the top spot in clients’ affections has been accompanied by repeated assertions that it is not a promotional marketing agency.

This might seem like old news to Arc Integrated Marketing, which has bobbed between first and second place in the survey for the past four years. It also resists the term promotional marketing, even if it has one of the strongest heritages in this sector.

But it is a similar story at BD Ntwk, which ends a four-year march up the table to take third position. The agency took the Marketing Communication Consultants Association (MCCA) “best of the best” award this year for its Coca-Cola “Win a player for your club” promotion.

Its managing director, Nick Rankin, says: “While BD Ntwk has come a long way in a relatively short period of time, there is still a hell of a lot to do in order to achieve the goal [of getting to the top] – and then remaining there.” • He has set the goal of making the agency number one in the UK for the provision of marketing communications. He also wants to be the employer of choice for the best talent in the industry. “This is being achieved by systematically reinvigorating and further professionalising every aspect of the agency,” he says.

This has seen the appointment of new creative services directors, together with two new creative heads. Six new online and 20 offline staff have been added and the new business team has been strengthened. New business from clients such as Tesco, eBay, PayPal, Peugeot, Coca-Cola Enterprises, United Biscuits and Red Letter Days have involved everything from global digital marketing to design.

“In terms of the competitive landscape, the sector seems to be increasingly challenging and rather fragmented, with a number of relatively new agencies attempting to make their mark and several large above-the-line players appearing to creep into more traditional below-the-line territory. However, we are confident that our model of a multi-disciplinary approach is both logical and robust,” says Rankin. 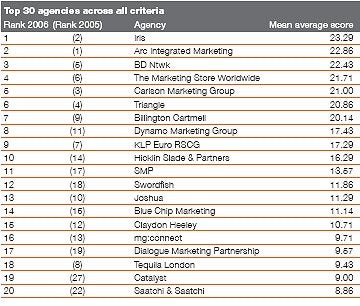 The key elements of the climate change occurring within promotional marketing are two-fold – charismatic directors and planning departments. These two factors are doing more to shift perceptions of what such agencies are about than almost anything else.

And in many respects, this demonstrates that what clients value in this changed world are the things they have always valued – ideas and individuals. Regardless of the type of work or the medium in which it appears, agencies need to keep themselves and their output fresh.

Roger Marriott, who took over as managing director of Dynamo Marketing Group just 14 months ago, says: “For me, our success is very personal. We are very accountable to our clients’ needs, even more so now that clients are having budgets cut. Return on investment has to be proven before they will go for anything.”

He is sceptical of the rapid growth being achieved elsewhere which might not have a solid foundation. “I see agencies built on one or two big clients. Our agency’s client list is up to 22. It is evenly spread on purpose, because one sector could take a dive – for example food, because of anti-obesity concerns,” he says.

Underpinning this broad spread of work has been extra investment in the planning department, with a new planning director and head of planning. This has paid off in pitches. “We won three clients based on our strategic input and putting their money in the right place,” says Marriott.

Pat on the Back
Increasingly, that means digital and experiential work, just as much as on-pack. The agency picked up a clutch of Institute of Sales Promotion (ISP) awards, including the coveted audience award for its Sainsbury’s Active Kids programme. “That has helped us along the way,” he notes.

Another agency storming into the Top 10 from outside the conventional sphere is Hicklin Slade & Partners, which was ranked number 80 just four years ago. “We wouldn’t say our heartland was promotional marketing any longer,” says planning director Mark Runacus.

Instead, he believes the agency’s growing reputation comes from its clear focus. “We’ve consistently provided creative ideas that work. For example, every award we have won for Honda has been in equal measure for creativity and return on investment. That is the way we have set out our stall,” he says.

The agency’s new positioning includes the solipsistic strap line “work that works”. It has also adopted a new approach to winning business. “I can’t remember the last time we did an old-fashioned credentials presentation. We spend time thinking about the client’s business and let that drive the marketing,” says Runacus.

Planning for the Future
Out of a 47-strong agency, nine work in the planning department – a remarkably high ratio in this sector. Digital planning has been integrated to ensure that new media are given due consideration. Indeed, Runacus says these channels are deliberately over-emphasised, even though the agency is media neutral.

As a reflection of how the world of promotional marketing is changing, Runacus adds: “I imagine that in one or two years we won’t have separate digital planners because all our planners will be digital and thinking multi-channel.” A strong year financially has underlined the value of taking this approach.

Close on his agency’s heels in the survey comes SMP, a name which industry insiders are likely to know, but which has been less familiar in the broader marketing world. Although a long-term presence in the top 30, the agency is now knocking on the top ten.

“We don’t have a robust public relations programme – we are not high profile,” admits joint managing director Simon Mahoney. But the enhanced standing among this year’s survey respondents stems from the arrival of three new board directors. “Our internal structure has changed as the founding partners have developed an exit plan,” says Mahoney.

Recognising the generational shifts in the industry, the new directors have been granted profit shares on condition that they exchange the cash for shares in the company. “They now own 27% of the business. Their strategy is completely different to our original plan,” he says.

On a Rising Curve
An aggressive business development programme is being pursued which has already seen agency staff numbers rise from 23 to 45 in three years. The objective is to become a top ten agency. Six new business wins in a row, including Boots, two pieces of business for Volvic, Kenco, Braun Europe and WD40 are contributing to this. The agency has also been appointed to handle one of the biggest software launches for an unnamed client.

Planning is also helping to deliver these results. “We are doing a lot of market research before going to clients,” says Mahoney. His • agency has similarly ditched conventional credentials presentations in favour of discussing business problems. Peer group recognition is steadily following. “We were runner-up as agency of the year in the ISP Awards – after 23 years,” he notes.

Catalyst is another agency following the pattern of rapid progress up the reputations table which is transforming the nature of the industry. Ranked at number 80 just three years ago, it made the top 30 last year and has now entered the top 20.

“Over that period there has been a focus on the importance of creative and client accountability. That is the main reason for our rise,” says managing director Sam Jordan. “We have passed more strategic value on to clients.”

As with the other rising agencies, Catalyst has been investing in its planning department with a new director holding a board position. “That function has evolved from consumer insight as the springboard for creative work into communications planning for clients and what channels they should be using,” says Jordan.

He believes this is where the new generation are scoring over traditional packaged goods agencies, which are less able to be “channel neutral”. The growth of experiential marketing is also stretching the sector and bringing a whole new set of skills into play.

Jordan says: “Over the past six months Catalyst has focused on existing clients, such as Müller and United Biscuits. Now we are looking at new business.” The agency also picked up its first MCCA award for the best integrated campaign on its United Biscuits account.

A Change of Pace
Further changes to the character of the industry seem inevitable. The MCCA agency of the year in 2006 was Elvis, for example, an outfit that did not even exist three years ago. And the new names crowding into this year’s survey suggest that the pace of change is continuing.

All the more remarkable, then, that any long-established agencies should still be scoring so highly. They will no doubt hope that this is an indicator of their ability to adapt to a new environment, rather than failing to recognise that they have been cooked.

Market Management Services (MMS) interviewed a sample of 301 respondents chosen from Marketing Week’s circulation list. To be eligible for inclusion in the survey, respondents had to be marketers with responsibility for selecting or reviewing a promotional marketing agency – working within on of the UK’s top 500 spenders on advertising as measured by MMS.