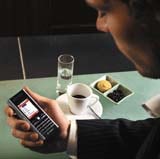 With mobile phone penetration far outreaching that of broadband and satellite television, and rich media-enabled handsets becoming the norm, UK marketers are starting to tap into their potential

There are now more mobile phones than people in the UK – more than 63 million at last count. Mobile penetration has grown at a faster rate than any other other communication medium to encompass 85 per cent of households – a huge opportunity for marketers.

To put this into context, broadband has a penetration level of 23.1 per cent in the UK and satellite television 31.3 per cent (Ofcom). With audience figures dropping as it spreads across an increasing number of niche channels, TV is no longer the all-encompassing marketing medium it once was. But each of these 63 million mobile handsets offers an obvious target for advertisers and marketers to cut through today’s barrage of fragmented media to reach individuals directly, wherever they may be.

As mobile handsets quickly develop multimedia capability as standard, mobile is presenting a fresh and engaging alternative to the plethora of traditional channels available. But what role is mobile likely to play in marketing campaigns in the coming years?

Text has provided the first opportunity to demonstrate the potential power of mobile to marketers. Annual UK person-to-person text has risen from 1.1 billion in 1999 to a predicted 36.5 billion in 2006. Marketers have been quick to embrace this technology, from text-based competitions such as Cadbury’s Text and Win and Live8 ticketing to placing votes for TV programmes like The X Factor and I’m a Celebrity – Get Me Out of Here.

What lies next around the corner, however, is even more exciting and has greater potential. As technology advances and handsets become capable of displaying rich, engaging content, the potential for communicating a brand’s values is suddenly no longer constrained by a text’s 160 characters.

Market penetration of third-generation (3G) devices has doubled this year from about five per cent to ten per cent. According to Strategy Analytics, this is set to almost double again to over 18 per cent next year. Add to this the number of GPRS (2.5G) enabled phones that are equipped with multimedia functionality, and more than a third of the devices in the UK will be capable of sending and receiving rich media content. That’s about 25 million consumers.

This development in mobile technology gives marketers the capacity to build a direct and meaningful relationship with consumers, communicating on a two-way basis through rich, captivating content.

The UK has been one of the first off the starting block to take advantage of this opportunity. O2 and Real Business have just compiled the first list of the UK’s Top 50 to Watch in Mobile (www.realbusiness.co.uk), identifying the most exciting and innovative mobile companies to watch out for. Forty per cent of this group are marketing companies – and content-focused and responsible for many of the high-profile mobile marketing campaigns of late. Thanks to a culture of competition, high-quality design and service skills, and importantly an early lead in mobile phone adoption, the UK has found itself at the cusp of the mobile marketing revolution.

For instance, Hypertag, one of the 50 to Watch, has developed a means by which product information can be communicated via Bluetooth from an advertisement to a passing consumer’s handset. On the content front, MX Telecom was recently responsible for streaming Big Brother to mobiles – the direction in which content is heading. Opera Telecom, a &£100m Birmingham-based company, perfectly encapsulates the opportunity within grasp, providing a suite of services – SMS, picture messaging, TV/video, location-based, internet, games, music and so on – for a number of clients including GMTV, EMAP and Northern &amp; Shell.

Developments in mobile phone technology signal an impending move from coupon-based marketing to more engaging use of video, sound and interactive content to communicate with consumers. The O2 Top 50 to Watch highlights the progress that has already being made in this field in the UK. However, there is plenty more to come. Barriers still remain in place as a result of privacy issues – mobile is not only pervasive but can also run the danger of being invasive.

Big brands such as Sony, Disney, Coca-Cola, Heineken, Ford and dozens of others are starting to invest big sums in mobile marketing, though the medium still does not have the dedicated place it deserves on the majority of marketing campaigns. However, early indications are that this is changing, FT.com, Reuters, Vogue and Heat all have dedicated mobile initiatives and 2006 is set to be the year that marketing and advertising follow suit.

There is no other medium as ubiquitous or powerful as the mobile phone when it is used to it is full potential, particularly with the richer opportunities offered through MMS, WAP and now technologies like video shortcodes. The question for brands now is how they do it. Mobile is all about user choice, so content must be compelling enough that consumers seek it out. Few traditional advertising agencies really understand how to deliver effective mobile marketing, so they have not yet done a great job fostering understanding among clients. Effective use of mobile ranges from simple text alerts and reminders to rich streaming video brand experiences. But to do it well you need to understand your audience, the canvas you are working on, and the intricacies of the handsets you are targeting.

Trends is edited by Nathalie Kilby. Mike Short, chairman of the Mobile Data Association, contributed to this week’s Trends Insight