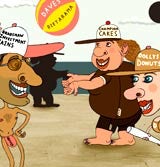 Few Marketing Week readers will have to tax their memories too hard to remember the days when promotional clothing meant a job-lot of extra-large T-shirts, logo emblazoned across the chest, trucked out to various destinations with about as much forethought as Prince Philip gives to his public utterances.

Those days are long gone. Nowadays we see promotional clothing and textiles of every colour, form and calibre imaginable, and a business that has come a long way from the gear churned out by the bloke in the dodgy shop under the bridge at Kings Cross. This is not so much because clients are increasing their spend on clothing, but rather because they expect more for their money.

“Promotional clothing is definitely changing,” says Danny Marsh, director of promotional clothing manufacturer Pelmark. “We work mainly with blue-chip companies that want to advertise their brands. They used to want mainly clothing and caps, but clients are now looking to consolidate their spend in order to get a better deal, so we’re being asked to produce items like inflatable chairs, games, puzzles, colouring books and water bottles for our existing clients.”

“A lot of big companies were guilty of merely mass-producing the extra large T-shirt with their logo, but this is changing – you can’t give these to people with taste any more,” agrees Debbie Crawford, European brand manager at Fosters Lager. “We have to acknowledge that people are more self-conscious about what they wear nowadays, so we have to think about the type of clothing they want. At Fosters we’ve expanded our original range, which consisted of large T-shirts, skinny-rib girls’ T-shirts and caps, and now we have items including rucksacks, beanie hats, bodywarmer gilets and a whole range of clothing in Fosters colours. They are premium-packaged and can be found in major male retail outlets.

“When we first approached Pelmark to design our range, it went far beyond what we’d originally expected. The new range pushed the boundaries and expanded our colours beyond the traditional red, yellow and blue of Fosters. For a brand manager it’s daunting to make that departure, but it helped to develop a more fashionable range. Pelmark also brought in side tabs [small but prominent labels sewn into side seams] and woven tabs [logos appearing directly on the item], so the branding is more subtle but remains effective. When someone looks at our garments now they won’t immediately realise they are Fosters garments, but they’ll enjoy wearing them because they don’t look like free beer T-shirts.”

David Gordon, director of promotional and corporate clothing manufacturer TSF Clothing, believes that working alongside the client, and going that extra mile to help design and plan its promotional clothing range, can make the difference between whether a company sinks or swims in such a competitive market. “Much of the time agencies are too busy to plan, but we make life easier by making sure clients get the level of attention they need,” he asserts. “For example, we can print off three or four different polo shirts and logos in three or four colours, which we can send to the client within ten minutes. We try to offer the basic items, and then add something a bit special, like the Adnams Brewery shirts, which have inside tape around the collar, and side seam tabs.

“We also try to provide clothing that people will enjoy wearing. A classic example in the past few years is the polar fleece, which has become an acceptable article of clothing for people aged from 17 to 70. It’s not just seen as climbers’ clothing any more.”

First Choice Holidays has been providing children’s facilities at resorts, in the form of its Children’s Clubs, for a number of years at its holiday resorts. As consumers have become ever more exacting, however, the company has improved the clubs’ promotion.

“A few years ago we would have given all children a T-shirt when they arrived,” explains their head of marketing Adam Jones. “It was a good giveaway, because it was a way for the children’s rep to identify them, and it was a useful item for the children to wear when they were face painting and getting generally messy! Now we’ve signed a licensing deal with Warner Brothers/ Loony Tunes, and the children get different gift packs depending on their age. Children from 15- to 35-months get Toon Tots, which is a T-shirt, cap and water bottle; three- to six-year-olds get Tune Squad, a water bottle, T-shirt and legionnaire’s cap; and the Free Riders, the seven-to eleven-year-olds, get a T-shirt, cap and rucksack.

The secret is to tailor the goods to the target market, believes Jones. First Choice decided not to give the older children water bottles as they usually have their own pocket money, and would rather buy their own drinks. “They’d rather have the rucksack,” he continues. “They get a different T-shirt too – whereas the Toon Tots’ T-shirt has baby Daffy Ducks and Bugs Bunnies, the older children get characters like the Tazmanian Devil.

Of course it isn’t just the consumer who wears the promotional clothing, field marketers and brand representatives all over the country act as walking adverts for their products, at roadshows, launches and shopping centres. “It is a brand awareness thing,” says Thalia Wirth, account manager at agency TEAM LGM. “We often work with companies such as cigarette manufacturers, which can’t do above-the-line campaigns. If you’ve got a team of field marketers out there dressed in the brand colours, you can reinforce the message by putting a logo on clothing and caps. It is also a useful incentive as it is easy to give away a quality sweatshirt which is branded, and good items have longevity. If people like them they’ll keep them around and use them, which helps brand awareness.

“In our field, promotional clothing is often an add-on, for example for staff to wear at roadshows. It gives them credibility and kudos. It’s no longer just the basic T-shirt either – the promotional aspect is expanding to other items like bags, caps and jackets.”

With promotional clothing marketing becoming more competitive, manufacturers are having to expand their resources, from just having basic T-shirt printing facilities to becoming designers in their own right. Pelmark reali

sed just how far it had to go when it was approached by Baileys just over a year ago. “Baileys told us the items would have to be branded with logos in Baileys’ colours, but the actual colours of the items didn’t matter,” says Danny Marsh. “After we’d identified the style of product, including fleeces, caps, polo shirts and rugby shirts, we chose natural, earthy colours, and Baileys went for it. It was brave of it to go outside of its brand colours – it was a first, for us at least.”

With the industry having to meet a wider set of client demands, are clients increasing their budgets to match their increased expectations? “There is a different budget,” admits Adam Jones, who believes that spending money on a licensing deal with Warners has improved the First Choice children’s brand – after all, what child hasn’t heard of Bugs Bunny? “As the number of giveaways has grown, so has the budget,” he continues. “It is about getting it right. Although we want to get the most competitive price, there is no point in annoying someone by producing a substandard product. Also, the whole object of promotional clothing is that people wear it. You’re trying to present a brand image, and if you print on shoddy material or with dyes that run, people won’t trust the brand. It is quite a high expenditure, but for us it is definitely worth it.”

“You can improve the standard of clothing without spending huge sums of money, asserts Fosters’ Debbie Crawford. “It is more about making items desirable, which you can do by spending more time on the brief and working with a partner. You work out something that will hang together well, rather than spend a fortune on something no one will wear.”

It would seem, then, that the promotional clothing industry is still big business, responsible for more than just the production and delivery of items. With design and textile awareness to consider, as well as a need to produce clothing that captures the character of the brand at the lowest possible cost, manufacturers are under increasing pressure. These days it is not enough to provide basic items of good quality: manufacturers that are leading the field offer a consultancy service to their clients, suggesting new ideas and encouraging them to be brave enough to experiment with items that will help them to stand out in the market.