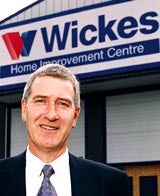 David Robey is a restless soul who has worked his way round many of the leading businesses in UK marketing.

His odyssey has taken him from Tesco – where he claims to have invented the idea of marketing stores as brands – to a brief stint at Carlton Communications, on to Safeway, which he left and rejoined, followed by Co-operative Retail Stores, Shell and then to Australia, where he worked as a consultant.

This time he has swapped the sun-drenched beaches of New South Wales for the joys of selling woodchip and widgets from his office in Harrow.

After returning from down-under last year, he took a job as commercial director at Wickes shortly after it was taken over by acquisitive DIY giant, Focus. Now the parent company has appointed him group marketing director for Focus Do It All, Wickes and its December purchase, Great Mills. With 537 stores, it has a 15 per cent share of the UK DIY market.

Robey believes that within the next five years B&Q will increase its market share from 25 per cent to 45 per cent. His plan, once the final arrangements of the board restructure have been ironed out, is to look at a new format for the three companies, bringing them together to tackle the market leader.

Although he won’t be drawn on the possibility of the three chains being rebranded under one name, he says that buying company cars, stationery and the like under one name means you get a better deal.

Robey’s career is interspersed with numerous moves, though it is not boredom which has lead him to jump so often. “Once you have made a contribution, that’s all that matters,” he says. He does not like to hang around too long – sometimes not even to wait to see the plans he has put in place being launched.

He has not always seen eye-to-eye with senior management, and when faced with immovable opposition on crucial issues, he has left for the next challenge. He comes across as an executive with a definite way of doing things, but if something gets in his way, he will look elsewhere.

He began his marketing career with positions in companies such as RHM Foods, Bristol &amp; Myers, Allied Breweries and Whitbread before working for seven years at Tesco.

During his time with the supermarket chain he was trading director, responsible for buying frozen foods, project director on Clubcard and corporate marketing director in charge of advertising and market research.

“I invented the concept of stores as a brand. Not terribly exciting now, but in the late Eighties it was quite revolutionary,” he says.

He is also credited with developing the Dudley Moore advertising campaign which is said to be one of the most influential campaigns of the early Nineties. Although he left before its launch, he was one of the original team working on the Tesco Clubcard, one of the most successful loyalty card schemes in retail.

“Any kind of loyalty mechanism is useful but it is not a substitute for a good core business. You have got to have good products, fresh food, staff who are friendly and no hold-ups when people get to the checkouts,” he says.

In 1993 Robey left Tesco for a stint at Carlton Communications as managing director but the glamour of television was nothing compared with the attractions of windy retail parks and supply chain management. After three months he was back in supermarkets as sales development director at Safeway.

After a year he left, only to return 12 months later, this time as the man responsible for advertising strategy, consumer promotions, electronic relationship marketing and design.

The beginning of 1997 saw Robey leave the marketing arena to take up the position of chief executive at the Co-op’s food division. His first action was to replace Manchester’s J Walter Thompson with London-based Duckworth Finn Grubb Waters.

“The Co-op was a &£1.2bn, 500-store business and if it hadn’t been for the differing politics I would still be there,” Robey says.

“I tried to bring it into the 20th century. What was needed was a merger of the Co-op businesses. I started that project off and it has since happened.”

Robey is a serial marketer – but he has not made the permanent jump from marketing director to chief executive, which is the Holy Grail of so many ambitious marketers.

Michael Finn, chief executive at Duckworth Finn Grubbs Waters, who worked with Robey on the Co-op account, says: “He is very demanding but he gets the best out of his staff. He puts a lot of faith in the people he chooses. David is a great talent spotter and had a talent for picking people and putting them in the right job.”

Eighteen months later, Robey was poached by Shell UK to head its retail division with a special brief to develop the Select stores concept. But Robey left Shell frustrated at not being able to do things his way.

“Shell changed its mind,” he explains. “I thought I was employed to sort out the UK but the structure had changed and most of the decisions were coming from Europe.

“I got frustrated. I like to do things my way,” he adds.

So it was to the sunny beaches of Australia he headed.

“I had been interested in Australia for a long time and fancied seeing what it would be like living out there.”

While there Robey worked as a consultant and although he has returned to the UK, he says he would not rule out living and working elsewhere in the world.

He has just returned from holiday, where he spent time wandering round Tesco’s new acquisition in Thailand, the Lotus chain, while staying on the island of Phuket. An interesting challenge and one you can tell he would have more than a passing interest in.

Although he says only four and a half months in DIY do not make him an expert, business and market figures still roll off his tongue effortlessly. One thing is sure – this is a man who likes to be credited with bringing new ideas to a business. The problem is: will he stick around long enough to see these new ideas put into place?

ITV advertising revenues are set to plummet by up to nine per cent in January and February compared with the same period last year. The dip – a disappointment for ITV owners Granada Media and Carlton and a worrying indicator for the whole ad industry – comes after a record year when revenues were bolstered […]

Quick-witted Internet users could become very rich this year, thanks to an online treasure hunt game which threatens to become as popular as Who Wants To Be A Millionaire? In Treasure Hunt 2001, shadowy author Max Valentin is offering $1m to surfers who can solve a series of labyrinthine puzzles and track down a fictional […]