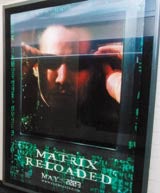 You may have noticed a recent poster for The Matrix used holograms to produce a double image – what you saw from one angle was not what you saw from another. Eye-catching? Yes. Expensive? Almost certainly. But not all clients can boast the pointof-purchase (PoP) budget of Warner Bros, and whereas for a film like The Matrix: Reloaded use of the latest technology is clearly relevant, not every brand sits comfortably alongside such wizardry. So what is the role of technology in printed PoP? Is it revolutionising the industry, or are there equally effective, cheaper ways to use traditional materials?

AD Creative managing director John Graham believes designers are now able to experiment more freely. New technology is starting to deliver what it only promised before, and offers can be turned around very rapidly.

“Take the dump bins we produced as a recent test for Marks &amp; Spencer. Instead of a traditional cardboard device that would inevitably have ended up somewhere else on the sales floor, we came up with a polypropylene solution integral to the fridge. It worked well because it was appropriate for the offer: crisps as part of a meal deal,” says Graham.

He believes that half a decade ago such a merchandising solution would not have been possible in terms of delivery, price and mechanics. The weight, longevity and durability of materials were key, he says. And because the solution was simple – it arrived as a lightweight, flat-packed display that popped up – the result was an item that worked both with the customer and logistically.

Imaging has also come on in leaps and bounds over the past few years as a result of digital technology. Lambda, inkjet, Scanachrome and direct-to-substrate systems have made the link between a designer’s Mac and the end result better, faster and more accurate. These days you can print direct onto sandblasted timber, glass or virtually any other surface.

Graham continues: “It’s possible to change the entire identity of your environment with graphics: you can wrap an entire building overnight. The more professional graphics suppliers have taken to this with gusto and created adaptations of their own. Indeed, the forging of a good relationship with a reliable graphics house is essential if you’re to keep up to speed with the latest ideas.”

Simpsongroup managing director Mark Simpson, is also positive about the latest developments: “Flat-print digital machines can now be used to print on all sorts of rigid materials, including heavier substrates such as wood. Although there are still issues regarding turnaround times on larger quantities, this does mean we can produce runs of up to 50 on almost anything, allowing the retailer to test different items or produce local campaigns very economically. And speeds and quality are improving all the time.

“There’s also a move away from PVC, because it’s not very environmentally friendly, especially when you can achieve the same look with paper or card. We encourage clients to use simple materials and buy in bulk to keep costs down. Corrugated card is especially popular: print innovations mean you get much better results than you used to, and it’s cheap. Plus it can be put through a shredder, so it’s recyclable too.”

Not everyone is so unreservedly enthusiastic, however. “If technology is revolutionising PoP, then to a certain extent it’s passing us by,” says Catalyst Marketing senior account manager Emily Smart. “That’s not to say we don’t continually present our clients with items that showcase the latest gadgets and gizmos in a bid to be original and achieve standout, but the reality is that the majority of work is still with paper and cardboard.”

Smart says that while more innovative PoP material, such as plasma screen

s, is emerging, this is still in the very early stages and is limited to a small number of stores. She believes that most retailers can’t afford to fund their set-up costs single-handedly, and while they might see in-store screens as a great media opportunity for manufacturers, in the current economic climate many budgets simply won’t stretch that far.

“Our clients are looking to high-volume, low-cost PoP, which they can get into as many distribution points as possible. Kits containing store posters, leaflets, dispensers and so on are still seen as representing the best value for money,” she says.

Communications Agency managing director John Gellett agrees: “While new technology may well be revolutionising the print industry, the reality is that the role of printed PoP is changing very little, not because designers or clients don’t want to experiment, but because the environment simply doesn’t allow for it.”

Gellett says that the way retailers operate promotionally inhibits technological innovation. For instance, the major multiples usually run short bursts of activity with all material produced funded by the brand owner. Given the short-term nature of such promotions and the well-recorded low levels of compliance in terms of displaying campaign materials supplied by the brand owner, even small innovations will almost certainly fail to deliver a corresponding return on investment.

“I believe we are unlikely to see significant innovation until this pattern changes,” he says. “The two major advantages of traditional materials such as cardboard and paper are low cost and flexibility.”

Mercier Gray managing director Rob Gray clarifies: “You can refresh your ideas much more frequently and site PoP more widely within stores or roll it out to a retailer’s entire estate, thereby achieving greater coverage. At the core of any PoP campaign is creativity and design, and technology doesn’t always provide the best mechanism. Whichever method you choose, it should reflect brand positioning and integrate with all other elements of your marketing mix.”

One of the inherent problems is that it is hard to quantify the effectiveness of PoP. It’s possible to take a measurement of sales before and after a display goes up in store, but given other variables, calculating a precise return on investment is difficult.

Methods for measuring the effectiveness of PoP are haphazard in comparison with those used to measure direct-response advertising or direct mail, where it’s far easier to assess cost per response. The lack of a universally accepted method makes it tougher to persuade clients to invest in innovative PoP, especially when budgets are tight.

Given these constraints, is there scope for innovation within a more traditional framework? Catalyst’s Smart says:”It is possible to be inventive within limited cost parameters using paper, plastic and cardboard. We’ve just produced some light thieves for Wall’s Magnum Seven Deadly Sins range, for instance. These are hung from the ceiling within an outlet, hooked so they literally “steal” the light from the existing light source and appear to glow.

“Interchangeable PVC panels then allow staff to update the PoP easily to reflect the stock in store at any given time. So not only does the client get an illuminated sign at the fraction of the cost, but they are one that can promote countless product combinations too. Whether it be flip, lenticular or spinning displays, the trick is to create arresting PoP that bridges the gap between traditional and new technology.”

WDPA Communications managing director Russell Abbott has a similar philosophy: “Target the consumer accurately with the correct message at the right time. Technology alone is no substitute for this hard and fast rule.”

He says that with the big supermarket chains, on-pack leaflets with coupons are a cost-effective medium because the technology, in particular the gluing process, for on-pack has improved vastly. And he points out that whereas leaflets are often situated away from the products they advertise and are easily missed, the real advantage to on-pack communication is that it targets consumers when they are actually buying the product concerned. “It’s PoP at its most accurate,” he declares.

Yellow Submarine director Simon Kozak believes that the danger with new technologies is to assume that they are appropriate in every media. He says: “We all learned to our cost, for example, that to be effective, websites need to be more than on-line brochures. The same is true of PoP. It’s important to pay attention to the fundamentals of the task in hand if you are to make the difference that matters – and if it ain’t broke, don’t fix it.

“That’s not to say there isn’t a place for technology, but we’ve found that when it’s combined with printed matter it’s often most effective.”

So it appears that the key thing to remember is the creative idea. Technology is the enabler, not the creator. But creative use of technology will enable a better idea to shine.

The Newspaper Society, which represents the regional press as an advertising medium, has appointed Russell Collier as marketing director, replacing David Hoath. His previous positions include acting executive director at the Newspaper Advertising Bureau in Australia.

Luxury beauty retailer Space NK has appointed Amy Gordinier as its first marketing director, reporting to founder and president Nicky Kinnaird. Gordinier was previously marketing director for Jo Malone, a London-based skincare and fragrances company that was bought by beauty giant Estée Lauder in 1999. Gordinier began her career with L’Oréal as a product manager […]

Sean Brierley managed to summarise in his perspicacious article “I am not a number” (MW June 19) what every consumer has experienced and continues to experience with call centres. We all hear endless stories of “you now have 36 options” driving people to distraction when all they want is to speak to someone. No one […]