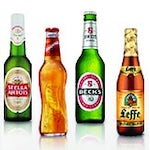 The brewer says the World Cup in South Africa, where its Budweiser brand was official beer partner, helped lift revenue to $9.2bn (£5.9bn) in the three months to 30 June.

Sales and marketing spend grew by 10.0% as the company invested heavily to back its World Cup sponsorship.

In the UK, beer volume sales grew 18.6% in the quarter. Budweiser volumes increased by 70%.

Stuart MacFarlane, AB InBev UK president, says: “We’re pleased with this ongoing positive momentum, and will continue to invest for growth in our focus brands, Budweiser, Beck’s and Stella Artois.”

Despite beating its own and analysts’ expectations, the brewer declared itself “not pleased” with its overall market share performance after gaining or maintaining share in markets representing almost half its volumes.

It says it will address this by “putting in place brand building and commercial programs” to improve performance in the second half of the year and into 2011.