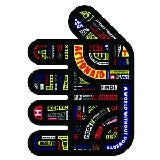 The campaign aims to attract donations for the charity by focussing on the benefits for supporters rather than the need for money.

It follows ActionAid’s direct response television advertising campaign last year, which used the same approach to attract more child sponsors in the UK to support communities in the Third World.

The charity says that using supporters’ experiences as an asset will encourage new donors, fundraisers and volunteers to campaign for its cause.

Richard Turner, director of Fundraising, says the “What a feeling” campaign highlights ActionAid supporters’ experiences because many supporters say that their involvement with the charity changes their lives for the better.

He adds: “We make no bones about it. Traditionally, charity advertising focuses on need. We are not doing this, we are focusing on the difference supporters make and the importance of conversation as part of the conversion process, rather than a traditional direct marketing approach.”

“What a difference” includes digital and social media and launches on 17 January with a PR stunt led by Golden Goose PR.
The charity will be recreating the “amazing feelings” supporters get from supporting ActionAid offering free massages in “the happy bubble”.

Last year the charity accused brewer SABMiller of “dodging” paying tax in such as Africa, depriving governments of money.