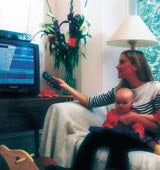 The use of iconic gestures in television ads helps boosts recall among viewers, according to the latest tranche of research into how the brain responds to messages on the TV, by Professor Geoffrey Beattie, head of psychology at Manchester University.

Beattie is to unveil the latest phase of his research at the TV United 2003 conference in Bath today (Wednesday).

He has conducted research for ITV which shows that messages delivered through audio-visual means, such as TV, have stronger recall levels than those delivered via audio or text.

For his latest piece of research ITV asked him to consider how the brain works with real ads.

Beattie created two different ads – one using just speech and image and the other speech and gesture – both for the same fake product, a fresh fruit juice drink called F that contains the equivalent of five daily portions of fruit in one small bottle.