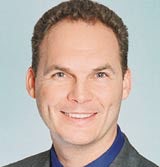 Active International, a corporate trading business which exchanges clients’ excess inventory for media buying credits, has appointed Tony Wheble as UK managing director, with a brief to improve the image of the business.

Wheble, formerly commercial director at Flextech, will hire senior marketing and media figures and “remove the stigma and improve the reputation of corporate trade”.

Wheble’s last position was group managing director at Flextech-owned package holiday channel TV Travel Shop. The business was sold to InterActiveCorp in 2002. He has also worked at Lowe Howard-Spink and Abbott Mead Vickers. BDDO, where he handled media planning and buying for clients such as Sainsbury’s, Weetabix and Apple.

Active International, which was established 20 years ago and has operated in the UK for eight years, is the world’s tenth-largest buyer of media time and space. It processes clients’ overstocked goods in one territory and remarkets them in another, offering media credits in exchange.

In the UK, the company works with brands which include Casio, Colgate-Palmolive, Carlsberg-Tetley and Mitsubishi. Most major media agencies, and all television channels except for Channel 4, work with Active’s media credits.

Wheble says: “I would like media owners and agents to embrace a service that protects and restores marketing budgets for advertisers and generates incremental income.”