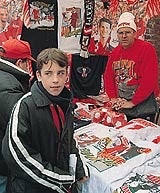 Manchester United FC is widely regarded as having set the pace in European – if not global – football. But just as the top teams are trying to emulate the treble holders on the pitch, they are being forced to play catch-up off the field in their commercial activities.

Last year, Man Utd hired Umbro European brand director Peter Draper as group marketing director to spearhead its assault off the pitch (MW July 22 1999). At the time of his appointment Draper said: “It is my job to make sure that what the club is doing on the pitch tallies with what the ‘brand’ is doing in its business operations.”

And with current bids for the club’s shirt sponsorship reportedly exceeding &£50m over four years, it could be argued that Draper is making the Man Utd “brand” one of the most highly sought after in the world. Last year, the club had a turnover of over &£100m.

The big clubs, such as Arsenal, Newcastle and Chelsea, which through the Chelsea Village complex has three restaurants and two hotels, have all made strides to boost their income.

Just over the Pennines from Manchester, Leeds United FC claims to be starting to challenge Man Utd on both fronts. The club, owned by Leeds Sporting, has set up a host of new divisions – including a travel company, publishing arm, IT training wing and financial services business. Its retail division alone witnessed a 50 per cent rise in sales last year.

Commercial director Adam Pearson says: “Each business has been set up as a standalone subsidiary and individual profit centre, with specialist management in place. We have been aggressive commercially but we also attract local businesses. Our travel division, for instance, has attracted almost &£6m in business from corporate customers.

“Leeds Utd has more than doubled in size over the past two years, with significant growth in operating profit. We have overturned the perception of Leeds as a dour Northern team to become one of the major brands in European football.”

Yet, with a &£28m turnover to July last year, it is still some way from toppling Man Utd.

In any case, this surge of commercial activity has come at a price, with many fans accusing clubs of exploiting their loyalty to their favourite “brand”.

The UK’s most successful team, Liverpool FC, has largely fought shy of this commercialisation. The club, which has won the European Cup four times and the league championship 18 times, claims to have a global fan base of more than 2 million people.

Last summer, the Granada Media Group bought a 9.9 per cent share in the club for &£22m, which gave it a seat on the Liverpool board (MW July 7 1999). The remaining share is still privately owned by the Moores family.

The club has been viewed as something of a sleeping giant in terms of off-field activity. Some argue it has been far too slow off the mark to fully exploit its brand. Liverpool has no commercial director or official UK supporters’ club, and was the last Premiership team to set up an official Website, which launched only last month.

But that is likely to change as Granada starts to make its influence felt. This week, it appointed the club’s first brand director, Davide De Maestri, from ad agency M&C Saatchi. Although hired by Granada, he will report to Liverpool chief executive Rick Parry.

De Maestri, who is keen to stress he is not a commercial director by another name, believes many top clubs have been insensitive in the way they have handled expansion opportunities.

He says: “Certain clubs are in danger of undermining the special relationship they have with their supporters. But at Liverpool we are conscious that brand values are just as important as monetary value.” Although, to be fair, not every club has the luxury of being privately owned.

De Maestri believes his advertising background will enable Liverpool to avoid the charge of selling its soul to pull in money: “Advertising gives you great insight into consumer behaviour – whether it’s tailoring products or adopting a strategic approach to revenue streams – and that is vital in this business.”

It remains to be seen whether De Maestri’s – and Granada’s – brand management techniques will permeate to where the supporters believe it matters most – and push the Liverpool team back above arch rival Man Utd.