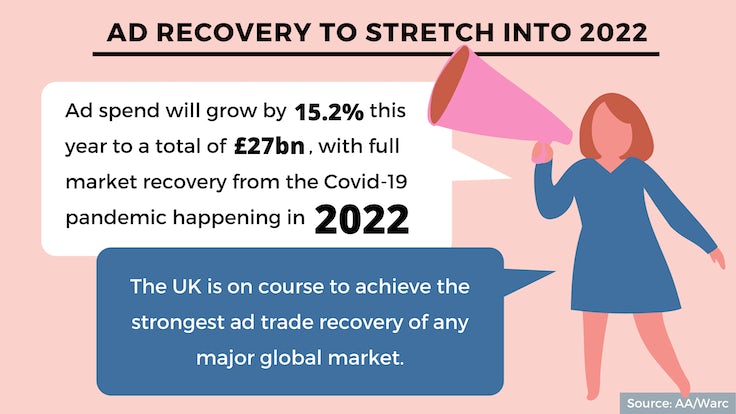 Ad recovery to stretch into 2022

Ad spend will grow by 15.2% this year to a total of £27bn, with full market recovery from the Covid-19 pandemic happening in 2022, according to forecasts in the latest Advertising Association/Warc Expenditure Report.

The report says that ancillary forecasts suggest the UK is on course to achieve the strongest ad trade recovery of any major global market. Spend is expected to increase most significantly in media that were hardest hit during lockdown. Spend on cinema ads is forecast to rise by 268.8%, and digital out of home by 52.3%.

Figures for 2020 show a total decline in spend of 7.2% during 2020, with a shift by advertisers towards online video, social media and search.

CMO tenure falls to lowest level in over a decade 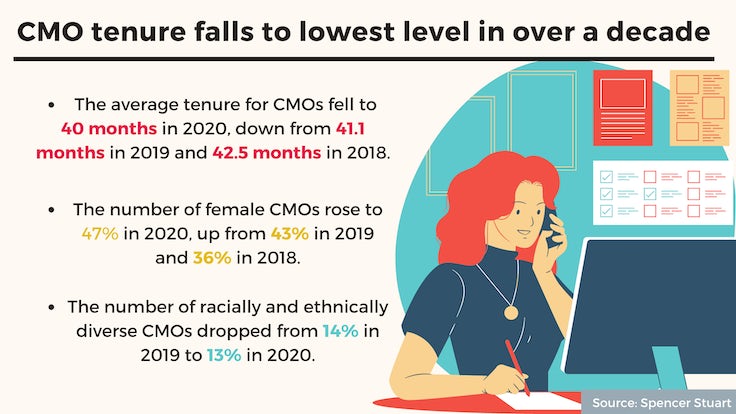 The analysis of CMO tenures at 100 of the most-advertised US brands also saw the median tenure hit its lowest level on record at just 25.5 months, as a number of long-term marketing executives transitioned roles.

Threefold increase in ads withdrawn or amended by ASA and CAP 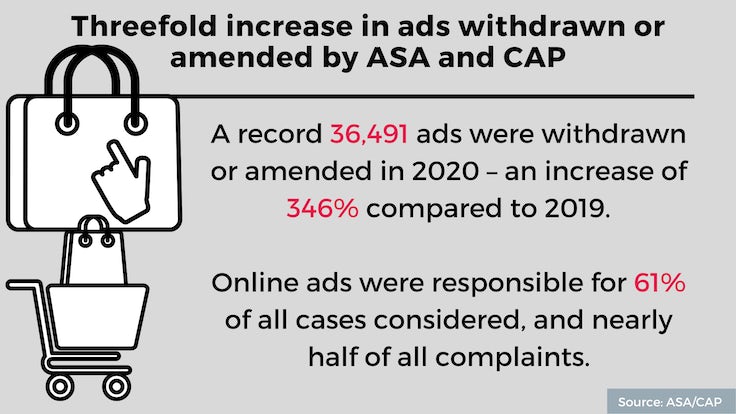 Online ads were responsible for 61% of all cases considered, and nearly half of all complaints.

There was also a 43% increase in complaints about TV ads, possibly driven by increased viewership during lockdown. TV ads accounted for one fifth of cases, while influencers make up a quarter, despite a fall in the number of complaints about them.

The health and beauty sector saw more ads withdrawn or amended than any other. 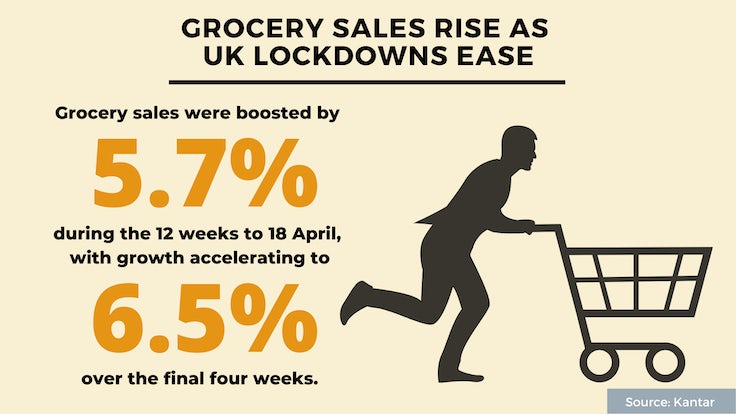 Take-home grocery sales were boosted by 5.7% during the 12 weeks to 18 April, with growth accelerating to 6.5% over the final four weeks.

The past four weeks were the busiest in-store for supermarkets in more than a year, as the number of trips made in April increased by 4% compared to March. With much of the over-65 community now vaccinated, older shoppers accounted for nearly half of the increased footfall.

At the same time, the number of people shopping online in the past month fell for the second time in a row. Having peaked with a share of 15.4% in February, digital orders now account for 13.9% of grocery spend.

And while online is still growing strongly at 46%, the rate is half what it was at the height of the pandemic.

Half of consumers do not find marketing emails useful 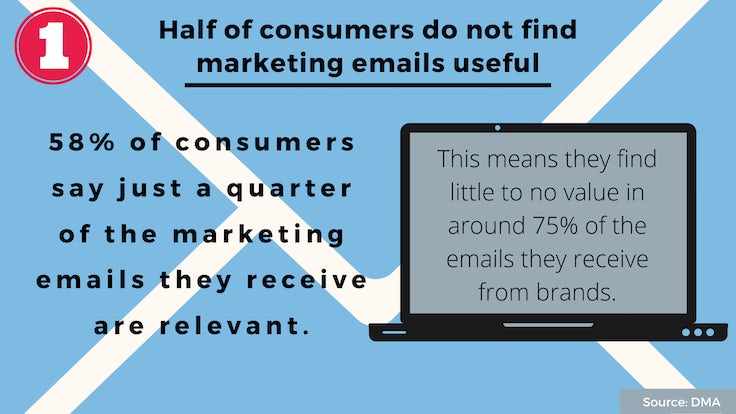 The majority of consumers (58%) say just a quarter of the marketing emails they receive are relevant, meaning they find little to no value in around 75% of the email communication they receive from brands.

However, the proportion of consumers that fall into this category has dropped, with the number of customers who believe less than one in four emails is valuable falling from 69% in 2019 to 56% this year.

Only one in six consumers (15%) report that at least half of the emails they receive are useful.

“While email remains the most effective and popular way for brands to engage with consumers there is still a lot of room for improvement. Over the past year an increasing number of consumers are finding a higher number of marketing emails useful. However, the fact that most consumers only find 25% or less valuable means that brands must become better at understanding what is relevant to their customers through intelligent marketing,” says Tim Bond, head of insight at the DMA. 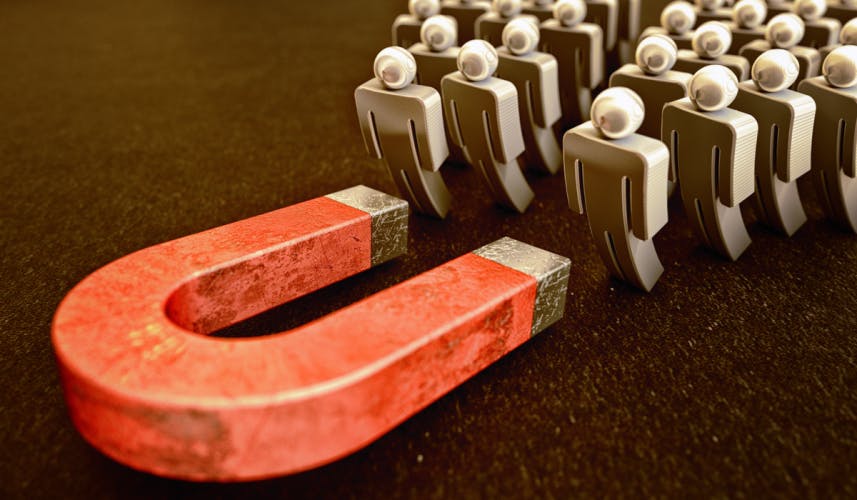 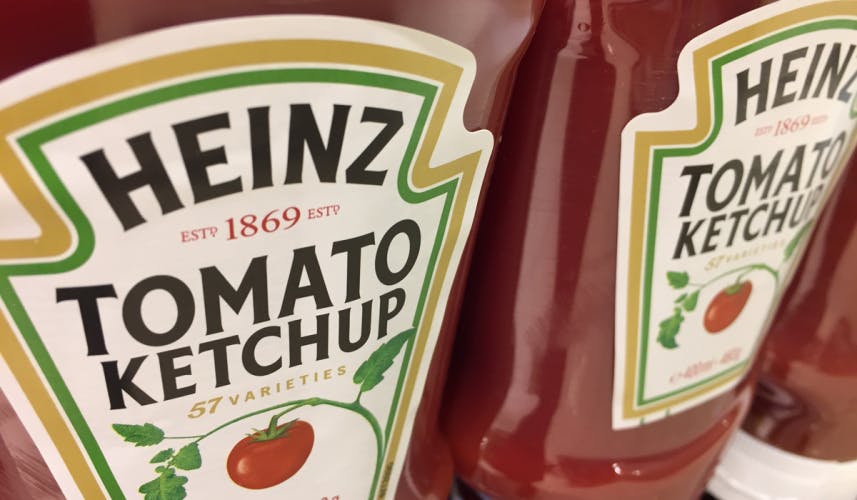 To become a world-leading marketing organisation, the FMCG giant says it needs to be “bolder and more creative”, highlighting examples such as the collaboration between Heinz and Weetabix in the UK.

Chief executive Alan Jope says ecommerce will “clearly remain a key channel” after the pandemic, and is keen to bolster Unilever’s digital operations further in response to changing consumer habits.