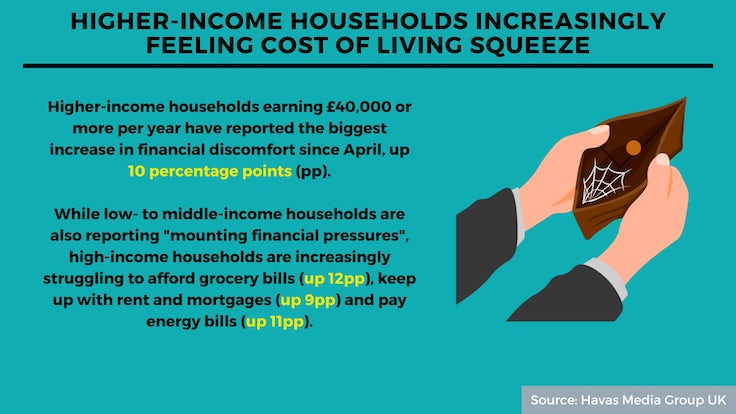 Higher-income households earning £40,000 or more per year have reported the biggest increase in financial discomfort since April, up 10 percentage points (pp) to 48%, according to research from Havas Media Group UK.

Based on a nationally representative survey of 800 British respondents between 22 June and 29 June, the data reveals the economy is a top concern for over a third (36%) of respondents, an 8pp increase since April.

As a result, consumers are more likely to switch up their usual purchases, especially in food and drink (up 5pp). High-income households have shown the biggest increase in likelihood to switch products, particularly in computer and video games (up 10 pp), electrical products (up 6pp) and homeware and furniture (up 8pp). 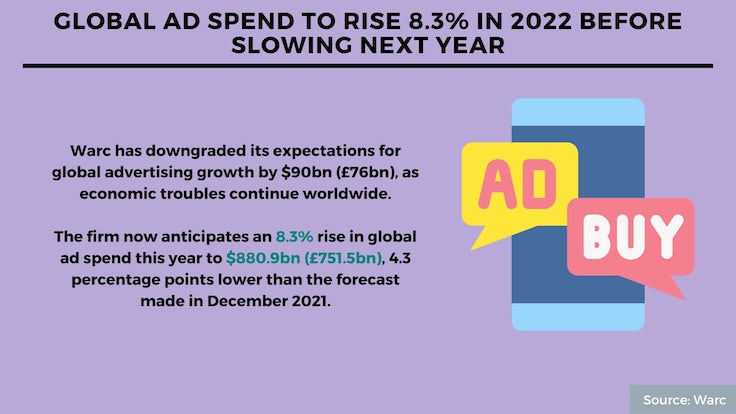 The expected rise, equivalent to $67.3bn (£57bn), is due to a “positive” first half of the year for the major advertising holding companies, as well as an uplift from second half 2022 events, such as the FIFA World Cup taking place in November.

Warc says the holding companies have recorded a positive start to 2022, while small- to medium-sized businesses (SMBs), that largely buy ad space directly, are “bearing the brunt” of the current tricky economic climate.

The organisation says the SMB slowdown will impact social media companies the most and expects social media ad spend to rise 11.5% this year, compared with 47.1% in 2021. This will drop to 5.2% in 2023. 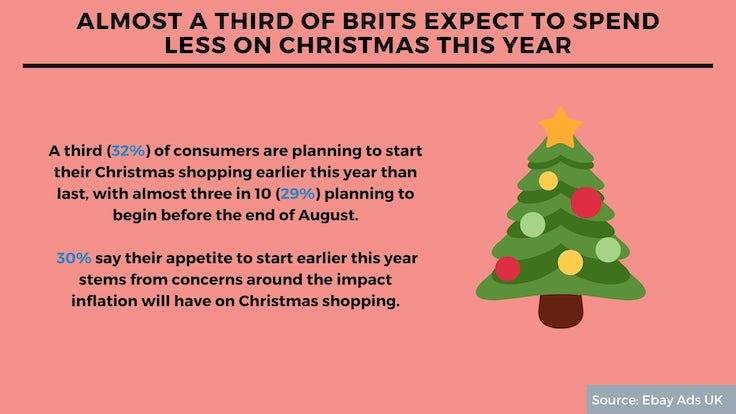 A third (32%) of consumers are planning to start their Christmas shopping earlier this year than last, with almost three in 10 (29%) planning to begin before the end of August, according to a survey of 2,010 UK consumers by eBay ads UK.

Nearly a third (30%) say their appetite to start earlier this year stems from concerns around the impact inflation will have on Christmas shopping. Six in 10 consumers (60%) say good value for money will be their most important consideration when buying gifts this year.

Christmas spirits have also been dampened, with one in five consumers (20%) expecting to feel stressed this Christmas – a considerable increase from the 14% recorded last year. However, half (52%) of consumers are optimistic they will be able to celebrate Christmas as usual this year, and 27% are looking at the holiday as a big occasion to look forward to. 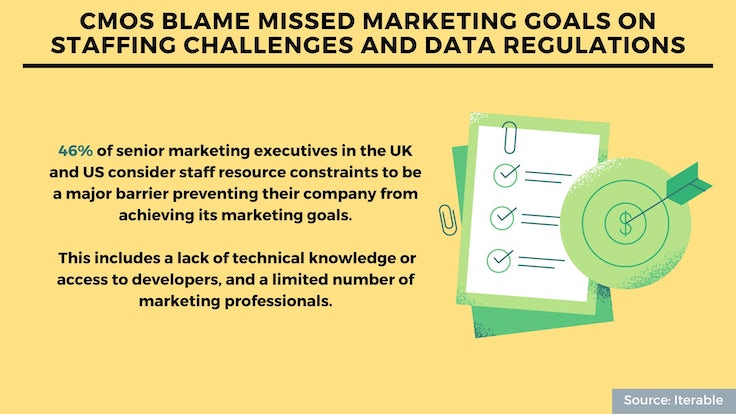 Nearly half (46%) of 500 senior marketing executives in the UK and US consider staff resource constraints to be a major barrier preventing their company from achieving its marketing goals. This includes a lack of technical knowledge or access to developers, and a limited number of marketing professionals.

However, according to the Iterable survey, the main impediment to achieving marketing goals is changing rules and regulations around customer data. Close to 50% of CMOs do not feel well prepared for the end of third-party cookies in 2024, though this figure drops to 37% in the consumer packaged goods industry.

In the UK alone, nearly a quarter of CMOs are unsure how individual customers feel about their brand, and 40% feel unable to deliver cross-channel harmonised experiences and individualised experiences.

A third (33%) of UK respondents think their ability to deliver responsive experiences and adapt to real-time individual behaviour is lacking. 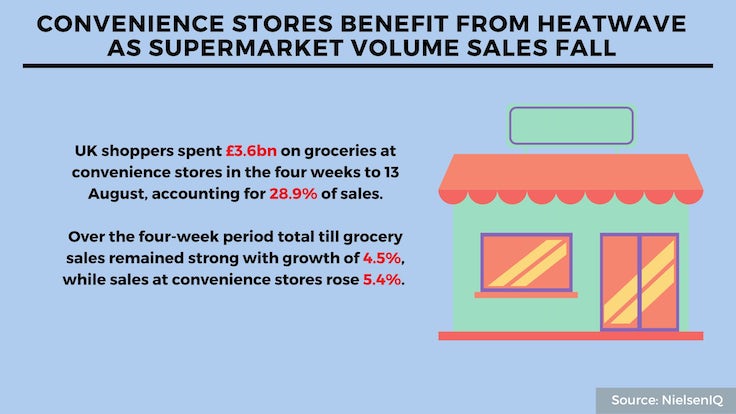 UK shoppers spent £3.6bn on groceries at convenience stores in the four weeks to 13 August, accounting for 28.9% of sales.

Some 21% of total sales within convenience stores were on fresh foods, where value sales increased by 13%. Sales of frozen foods within a convenience store setting jumped 29%, with sales of produce up 8%.

The opportunity to socialise amid the warm weather saw consumers choose to shop locally, with sales of ice cubes (up 44%), ice cream (31%) and frozen desserts and cakes (31%) all experiencing category volume growth.

With the summer holidays increasing travel opportunities and the heatwave encouraging shoppers to visit stores more often, in-store visits rose by 8%. As a result, online sales decreased by 8.7% and the online share of FMCG sales fell to 11.3%, down from 11.5% in July and a 12.9% share a year ago.

Aldi maintained a 10% market share over the 12 weeks to 13 August, making it the fourth biggest retailer in terms of sales, behind Tesco (26.8%), Sainsbury’s (13.8%) and Asda (12.6%). Morrisons and Waitrose were the only retailers to experience a sales decline over the 12 weeks. M&S sales were up over 7% and shopper penetration in the last four weeks reached almost 20% of British households.

The extra visits to local stores saw sales at Co-op outlets increase by 9%, making it the fastest growing retailer during the heatwave.

From defining what brands mean by effectiveness to the rising importance of measurement, Marketing Week’s exclusive Language of Effectiveness Survey reveals marketers are calling for the greater integration of effectiveness in business decisions.