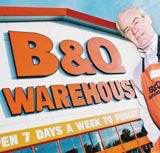 Advertising watchdogs have been forced to revise guidelines for retailers making price comparisons in their non-broadcast ads after receiving a deluge of industry complaints against such ads. The decision follows the latest of such disputes, between rivals Homebase and B&Q.

Homebase has objected to a B&Q press ad that uses the headline “Homebase lowered their higher prices on these products to compare them to ours. Next thing they did was to put them up again.” B&Q has been censured by the Advertising Standards Authority (ASA) for denigrating Homebase and for misleading consumers.

The complaint has driven the Committee of Advertising Practice (CAP) to publish a revised set of guidelines to help advertisers follow the advertising rules in the British Codes of Advertising and Sales Promotion. The revised guidelines will replace the existing help note on Supermarket “Basket of Goods” Comparison.

â¢The ASA has not upheld complaints against defence equipment manufacturer BAE Systems’ press ads that use the strapline “Innovating for a safer world”. The complainants said the ads misleadingly imply that the weapons are used only for peace keeping. According to the ASA, the ads are unlikely to mislead or offend.

One of the ads is a close-up of three poppies with a white rectangle on the poppy leaves. It uses the headline “11th November. Red Letter Day.” The ads were created by Marten Gibbon Associates.

Broadcasters are to put aside their differences to promote the value of advertising on the small screen at TV United 2003. By Amanda Wilkinson

Unilever is to embark on a multi-million pound revamp of its Persil detergent range this year in an effort to streamline the product range. Industry experts say that the packaged goods giant has flooded the market with Persil sub-brands in recent years, confusing consumers and resulting in poor sales. As part of the relaunch, Lever […]

Consider the poor folk at the Incorporated Society of British Advertisers (ISBA). Word has reached the Diary that some senior figures at the organisation do not recall receiving Christmas cards from certain ITV companies. Were they lost in the post, or did the companies merely send out cards that were so dull as to be […]