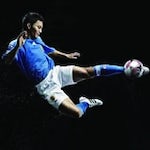 The map-based game, Fast Fuels Danger, Danger Makes Legend, asks players to sign up through Facebook Connect and then select a city to claim by challenging other players to secure land on the map.

Players challenge each other by selecting an area on the map and competing against another player by choosing their favourite football moves such as ’Fast’, ’Step Over’ or ’Fast Flick’. The winning combination wins the area on the map.

Adidas has recruited football stars such as Lionel Messi to help promote the game, with players able to win territory from the star in Barcelona. Adidas has also created a viral video to promote the game, which shows two players challenging each other to be crowned a legend.

Fast Fuels Danger was created by ad agency 180 Amsterdam, while the teaser videos were by production agency Knucklehead.