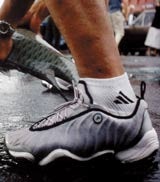 Sportswear company Adidas is launching a clothing range next week, which it claims will provide a “strategic” support system for athletes’ bodies.

Adidas says the range, which has yet to be named, has been designed to improve the efficiency of movement.

A spokesman for Adidas says: “The company has used its experience in designing sportswear for professional tennis players and swimmers to design this range. The company has also conducted research into sporting activities to see how the body reacts and used the information to design the new clothing. This range will be able to compress muscles and help avoid cramps.”

The range will not be a mass-market product and will be more expensive than replica football shirts sold by Adidas. There are no plans to advertise the range in the UK.

In August, Adidas announced the launch of a trainer, Intake, which is designed to combat foot odour. The shoe will be available in the UK from January (MW August 23).

The sportswear giant is understood to be searching for a global ad agency to handle its estimated $100m (&£68.5m) international business. The bulk of Adidas’s creative business is handled by Leagas Delaney and 180, an Amsterdam-based agency.