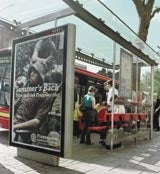 Transport for London (TfL) has put the multi-million pound contract to manage 2,500 advertising bus shelters in London up for tender. The contract is the largest of its kind in the UK and has been managed by Clear Channel-owned Adshel for the past 25 years.

Clear Channel and JC Decaux are expected to fight it out over the lucrative contract.

Bus shelter contracts in London are currently split into two sections, one managed by local boroughs and the other by TfL. Both Decaux and Clear Channel have contracts with the boroughs.

The contract up for tender in this review covers all the bus shelters which are owned by TfL. TfL is entitled to build bus shelters anywhere on its routes, which run through every London borough.

A decision is expected by summer next year.

Clear Channel chief executive Stevie Spring says: “TfL has a duty to check for best value. The partnership we have with TfL is a blueprint for how public-private partnerships should work.”

Adshel claims it controls bus shelters in 14 out of the 20 largest UK cities and has a 65 per cent share of the six-sheet market. Its figures are backed by audience research body Postar, but are often disputed by Decaux.

Premiership footballers, eh? Pampered within an inch of their life. Look at this lot, for instance. Sat there on the bench, probably won’t even have to play this afternoon, but nonetheless they get coffee and cakes delivered to them. Not really. This is Aston Villa’s conference and banqueting team, doing their bit for the UK’s […]

Xerox Corporation has announced that it will not be extending its 40-year sponsorship of the Olympics when it runs out at the end of 2004.