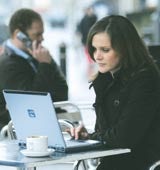 According to the ads for the science-fiction horror film Alien, “In space, no one can hear you scream”. On the Net, it’s different: everyone has the capacity to hear you, even if you’re whispering.

It is the way in which the internet gives a voice to anyone with access to a PC and a phone line that has made it the phenomenal success it has been – so much so that for tens of millions of people around the world, the internet has become fundamental to our lives barely a decade after it was created.

The internet allows people to communicate with each other, find like-minded people and then stay in contact with them, as the growth in so-called social networking sites in the past few years has demonstrated. Further evidence can be found in the rise of “blogging” – web logs or online diaries, sometimes written by celebrities, sometimes by nobodies.

Rather than being set up by service providers, content owners or similar companies, social networking sites are set up and driven by ordinary users with a common interest. These websites offer opportunities to exchange information and ideas online, and even set up face-to-face meetings if desired. They are also perceived as a key growth area for marketers looking to capitalise on the internet’s potential, after the success of sites such as Friends Reunited.

Indeed, Friends Reunited last week added a new section to its site, Connections, which has been created to allow visitors to make new friends rather than contact old ones. Users can search for people with similar interests and talk to them via message boards and instant chat rooms.

Jon Clark, head of Friends Reunited, says that Connections is a natural step from the message board communities that have grown on Friends Reunited and Genes Reunited. “We’ve focused on people’s common interests as the focus of the community, but the foundations are there for it to become whatever the users want. It also gives us a place for member-created content such as blogs, which we will be adding this year.”

He adds that Connections’ first week’s traffic suggests it will get 40,000 registrations in its first month.

For online publishers, however, the growth in such user involvement sites can be a two-edged sword. On the one hand, they offer a quick and cheap way to generate large amounts of content. On the other, the content they generate tends to be of limited interest and hence difficult to sell advertising on.

Friends Reunited charges a flat fee for the contacts section of the site: other networking sites are trying to raise revenue through traditional advertising, sponsorships and membership fees. But experts question whether there is any real profit to be found here.

Nate Elliott is an analyst in Jupiter Research’s London office. He says: “There are a lot of companies trying to find out whether there is a business here, and most of them are finding it difficult.” Elliott adds that “the internet is great at community, it’s great for sharing information. It doesn’t mean there is a viable business model.” He argues that if social network sites are to become successful – profitable – businesses, then they need to evolve away from their roots.

Many social networking sites were never set up to be profitable. Take UK site Netmums (netmums.com), a network of local websites providing information and advice for parents with young children. Founded in 2000, it has seen membership grow from 51,000 registered members last June to over 100,000 today, with local sites or message boards operating in 120 UK towns and cities.

The sites do not take advertising as such, so there are no banners or pop-ups. Instead, it has a small number of big-name sponsors – Huggies nappies, Nick Jr and BT have all signed up for year-long deals, and another big (parent-relevant) brand name is about to sign.

But, as Siobhan Freegard, ex-marketing director of Keith Prowse Hospitality, and one of netmums co-founders, says: “It was never set up to make money and it was never supposed to be this big: it was only ever meant to serve a local need.”

Social networking sites, and similar sites that encourage user involvement and even self-publishing through blogging, look set to become established as a major part of the online landscape. It is now up to marketers to work out how they can capitalise on the consumer involvement that such sites generate. And to do that, they will have to learn how to engage with a public that will be talking right back at them.

Puma has signed Arsenal international player Freddie Ljungberg to promote the brand. The four-year deal is worth £1.25m a year and involves him wearing its Cellerator Zero 5 boots.

NTL is increasing the number of channels in its Base Pack entry-level package for television customers as it fights off the challenge of Freeview. The move is the latest indication that NTL and Telewest are preparing to merge – a step that is expected to be taken later this year. It will also bring NTL’s […]