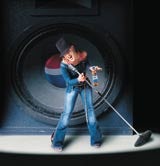 From the FA Cup final and Wimbledon to the Boat Race and cricket at Lord’s, the UK sporting calendar is not without its highlights. However, nothing on British shores can compare to the mother ship of all televised sport events that is the US Super Bowl. This year’s contest is taking place in Jacksonville, Florida on February 6 and sees the New England Patriots, take on the Philadelphia Eagles for the most hotly contested and eagerly awaited prize in US sports.

Established in 1967, the Super Bowl reaches an audience greater than any other televised spectacle in the US. According to Nielsen, in 2004 it had a national viewing audience of 89.7 million and this could easily exceed 95 million this year – meaning that it has also become a battleground for the advertisers trying to win the hearts and minds of the American public.

Unlike many of the more traditional events held in the UK, the Super Bowl was designed with television formatting in mind. It is not surprising therefore that advertising and commercial endorsement is such a central element in everything that the Super Bowl has come to represent. In a running poll carried out on fansite Superbowl-info.com, 45 per cent of voters indicated that the advertisements were the part of the 2005 show they were looking forward to the most – while only 28 per cent were most anticipating the game itself.

The Super Bowl ads are now considered such a valid piece of standalone entertainment that the NFL network will again be showing all of the spots back to back directly after the game. In Orange County, California meanwhile, there is a body called the OC Adclub, which will be meeting on February 10 to discuss the advertisements at the 39th Super Bowl at length and to analyse the implications for the state of US advertising and the industry in general.

In the months leading up to “Super Sunday”, the US media becomes heavy with speculation about which brands are running ad spots, what their position in the breaks are likely to be and what the creative content will look like. A relatively unknown brand can generate a large spike in awareness before an ad is even aired, thanks to association with the Super Bowl, while the ads themselves buy an unrivalled number of guaranteed viewers. Furthermore, there is the potential to build a huge buzz after the game from a successful ad, as much discussion ensues about the winners and losers the following week.

This year’s advertisers look likely to be a mixture of old and new faces. Anheuser-Busch, Apple, Ford, General Motors and PepsiCo are all back, while McDonald’s is returning after a sabbatical last year. Many of the big movie companies are throwing their hats into the Super Bowl ring again. Viacom unit Paramount Pictures is reportedly buying two spots, while credit card giant MBNA joins the fray for the first time, as does Ameriquest. Two other newcomers are Careerbuilder.com (an employment site) and GoDaddy.com, (an internet domain registrar). However, in terms of internet company presence it is a far cry from Super Bowl 2000, when 19 of the 35 advertisers were dot-com businesses.

With long-standing advertisers such as Anheuser-Busch choosing to increase their Super Bowl commitment even further this year, (as the largest advertiser it is set to take ten spots and is again buying exclusivity in the beer category on a nationwide basis), for brands and organisations, advertising at the Super Bowl can be a relatively straight-forward proposition: Do we have the budget? Are we able to negotiate a suitable deal and ad spot? Can we reach the right audience if we do this? For many advertisers the answer is yes.

The Super Bowl is also seen as the perfect opportunity to launch a brand with a fanfare. As GoDaddy chief executive Bob Parsons commented recently in the New York Times: “People who don’t do business with us don’t know us, so we’re stepping up to an aggressive marketing programme to reach those people, and we thought, what better way to kick it off than the Super Bowl?” Meanwhile, Careerbuilder.com vice-president of consumer marketing Richard Castellini commented in an interview with ClickZ.com that “2005 is a coming-out party for CareerBuilder. The Super Bowl is a great opportunity to announce to the world where CareerBuilder is and where we’re going to be.”

With an increasing number of new advertising opportunities available elsewhere and an audience that is fragmenting and moving to other media, the Super Bowl is not always the natural choice for those that can afford it. Monster.com, a site providing a similar package of services to Careerbuilder.com, has advertised at the Super Bowl since 1999. This year, however, it has done a marketing deal with Internet Broadcasting Systems instead, giving it a presence on 57 local news affiliates websites. According to the Boston Herald, by going online with its budget, Monster.com feels it will be more readily able to affect its goal of “deepening ties with employers and job seekers”.

Of course, last year’s event revealed some of the risks involved in associating with a live broadcast event. While the spot position within ad breaks and the content of an ad may be determined beforehand, there are other significant factors outside an advertiser’s control. The quality and closeness of the game can clearly determine whether viewers switch off after the third quarter or are glued to the screens until the final whistle. Furthermore, it can be costly for the broadcaster if things go wrong. The Federal Communications Commission (FCC) imposed a $550,000 (&£291,000) fine on Viacom, owner of broadcaster CBS, after thousands of complaints about the Janet Jackson breast-baring incident at last year’s half-time show.

Sensitivities continue to run high. The Wall Street Journal recently reported that Anheuser-Busch had decided not to run an ad that would have mocked last year’s on-stage incident, while a number of advertisers with very deep pockets – including last year’s embarrassed half-time show sponsor AOL, H&R Block and The Walt Disney Company – have chosen to sit this year out. As ever, Super Bowl advertising will undoubtedly be money well spent for some and less effectively for others, but with Paul McCartney and a mortgage provider responsible for the half-time show, it certainly looks like respectability is back and that the lessons of last year have been learned by the organisers. We will have to wait until Super Sunday to see whether that applies to the advertisers too.