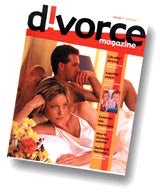 Despite the messages of peace on earth and goodwill to all men, Christmas and New Year can be a time of high stress and family arguments. The festive season may be a cause for celebration, but for many people the extended time spent with their spouse simply confirms their harboured fears that the two of them don’t get on so well these days.

As a result, more divorces are filed in January than any other month of the year and it is sad but true that in the US the divorce rate now stands at 50 per cent. Divorce is no longer the stigma it once was and for many it is just another factor in their increasingly complex lives. American marketers are recognising this fact of life more than ever now and are building it into their advertising, products and services.

Each US state has a different divorce law, so getting divorced can be both a legal and financial minefield. Perhaps unsurprisingly, a host of websites have emerged that are devoted to the subject of divorce. Many of them take different angles – from Stopyourdivorce.com and Divorceasfriends.com to Split-up.com and the Do-It-Yourself Divorce kit offered on Divorceonline.com. Yes, it’s true – you can organise your divorce online.

Inezita Gay, a 38-year-old marketing manager from New York, served divorce papers to her estranged husband using the Divorce.com website. “Divorce.com simplified the process for me, made it less adversarial and saved both of us a lot of money in legal fees,” she says.

In many cases there are children to consider. Supportkids.com is an Internet-based service that claims to have collected more than $50m (£34m) of past-due child support payments for thousands of families. It takes a percentage of each sum of money it recovers from the offending parent.

People researching divorce on the Net may also come across an interesting ad for Spectorsoft.com. “Contemplating divorce?” it says, “Find out if your partner is cheating…secretly record everything your spouse does online.” The ad promotes a piece of software which acts like a surveillance camera on a PC and enables the suspicious partner to see every e-mail and instant message sent, every chat room visited and every website viewed.

It would appear that e-mail is now one of the most popular ways to arrange illicit liaisons, as one “happy” Spectorsoft customer reported: “I bought Spectorsoft and it told me within 24 hours that my wife stole in excess of $20,000 from our business and gave me access to information that showed me where she met her lover. It’s magic. Not bad for $69.99.

Although divorce is a subject that must be handled with care in advertising, it is being used as a backdrop for a growing number of campaigns. This must be partly because advertisers realise it would be more offensive to insult the intelligence of consumers by constantly depicting the perfect nuclear family that is so rare nowadays.

Volvo and its agency Havas created a US ad called “Custody” last year, which depicted a father handing over the keys to the Volvo after returning from a weekend with his daughters. The intended message of the ad was that the car is so safe that wherever the daughters go, so does the Volvo.

Hallmark Cards, which introduced a “divorce card” in 1958 that failed to sell but has since been reintroduced with some success, was criticised by some for its ad last year depicting a divorced or separated couple. Created by Leo Burnett in Chicago, the ad showed a mother dropping her son off at the father’s. The son gives his father a card which says daddy is still the little boy’s hero. The ad received criticism for showing an unrealistic view, as it ends with the estranged parents sharing a coffee – perhaps suggesting that they would get back together. Obviously this is not the outcome in most cases.

UK advertisers have not been ignoring the trend towards “blended families”. That bastion of the nuclear unit, the Oxo family, was disbanded after 16 years last year, in favour of ads showing couples in clinches and more “real life” situations. Ariel’s latest powder ad features a girl talking about her dad being ready to “get out there” onto the dating scene again, thanks to his new blue shirt being kept in good condition by Ariel. And we cannot forget the VW ad where the woman throws the furs and jewellery her “man” has given her into the bin but keeps the VW, as well as the “Just Divorced” ad depicting the triumph of losing a partner but gaining a VW.

A development that may have seemed surprising even in the US divorce market, was the launch of Divorce Magazine in 1996. Although it hardly seems the most upbeat of titles, it does actually make sense, especially as many of America’s 75 million baby-boomers are now getting divorced. It contains helpful articles about the divorce law in each state, coping with grief and loss, single parenting and being single again.

Advertisers which regularly appear in the magazine include the obvious lawyers, therapists and accountants, as well as the not so obvious ads for products such as Infoview, which enables a live video conference through your television and telephone for “When seeing your kids every other weekend isn’t enough”.

New housing developments are also getting in on the market for singles’ dwellings. As one ad proclaims: “Now that you’re starting over, start with the ultimate in luxury rentala more luxurious level of living you so richly deserve. Especially now.” Dating agencies have also seen the potential in the divorce market as they remind readers that they are single again and will have to cautiously step out into the dating scene once more. Ads like these are targeting a growing market and seemingly offering understanding and a sympathetic ear at the same time. Most advertisers probably choose these messages of understanding because they are at pains to make sure they do not appear to be cashing in on people’s misfortune.

With a divorce rate of 40 per cent and rising in the UK, Ben Dorney is one person who is convinced that we are not far behind the US trend for overtly marketing to divorcees. This month he publishes the first issue of Divorce Magazine in the UK, aimed at the 250,000 couples in the UK, mainly aged 25 to 35 years, who consider getting divorced each year. Though it is nothing to do with the American Divorce Magazine, Dorney’s team at Heywood Publications have been encouraged by the success of the title in the US. Over 350 UK advertisers have already signed up to target the divorcing British public but some of them may be new to the world of advertising and need a helping hand – lawyers especially. Dorney says he envisages the same thing happening with divorce that happened in the personal injury arena, where marketing agencies set themselves up to go and find work for lawyers.

While some may argue that targeting divorcing couples in such a blatant way is insensitive and mercenary, editor of the US Divorce Magazine Diana Shepherd insists: “We don’t endorse or glorify divorce. In fact we encourage people to explore every avenue for saving their relationship before embarking on a divorce.”

Ben Dorney also insists that Divorce Magazine in the UK will have an upbeat feel, while keeping the seriousness of the subject matter in mind. However, in American marketing there are always exceptions to rules about sensitivity, such as one New York Subway ad that reads: “Need an affordable divorce lawyer? Call 1-800-Divorce – When Diamonds Aren’t Forever.”