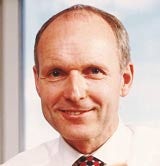 The Business is parting company with its advertising chief David Walsh after less than a year.

Walsh, the former global advertising director for the Financial Times, is not believed to have a job to go to. He was appointed to head advertising sales at The Business, the weekly newspaper owned by the Barclay brothers, last August. The appointment followed the ending of an outsourced ad sales agreement with the Telegraph Group.

A spokeswoman for the newspaper says Walsh will not be replaced directly but that head of display Nick Chapman will take on more responsibilities.

Walsh joined the Financial Times as advertising director in January 1999 from the position of deputy director of advertising for The Times and Sunday Times at News International. He was given responsibility for FT.com sales in August 2000 and made worldwide ad director in June 2002 (MW June 12, 2002). However, this position was axed following a restructure in March 2003 (MW March 31, 2003).

The Business recently ended a distribution agreement with the Mail on Sunday, whereby it was bagged with the newspaper in London and the South-east. It now has an arrangement with regional publisher Newsquest to deliver 100,000 free copies to targeted London homes (MW April 1).

The newspaper, formerly The Sunday Business, relaunched in January 2002 as a single-section title.

It’s refreshing to find some forthright opinions being put forward by marketers and agencies, and just such an opportunity occurred at the Cimtig Television Travel Advertising Showcase. Lined up on the panel to watch 20 television ads in front of a gathering of the industry’s great and good were Paul Cardwell of Doner Cardwell Hawkins, […]

Internet bank Egg is launching a second, blue credit card, its first new product since it was put up for sale by parent Prudential earlier this year. Until now, Egg has only had a single, green, credit card, which has been the mainstay of its business attracting 2.8 million customers since its launch in 1998. […]

Online auction site Ebay has handed its Â£3m media planning and buying account to PHD Media, after a four-way pitch involving Starcom Motive, Mediaedge:CIA and the incumbent MediaCom. The move comes as Ebay ramps up for its first above-the-line