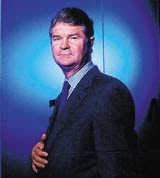 Aegis chief executive Doug Flynn is expected to quit the marketing services group to return to his native Australia and become chief executive of John Fairfax Holdings, publisher of the Sydney Morning Herald.

It is known that Flynn has been approached about the job, but it is not clear whether he has formally accepted it. Senior executives at Aegis, which owns media agencies Carat and Vizeum, are understood to be in discussions over who will take the reins if Flynn should go.

According to some insiders, possible internal candidates include David Verklin, who has been chief executive of Carat North America since April 1998 and who was appointed to the board in 1999, and finance director Jeremy Hicks. But others have dismissed them – Verklin because he has no UK experience and Hicks because he does not come from a media operating background. They have indicated they are likely to look at outsiders.

Aegis is remaining tight-lipped about the speculation. At Fairfax, Flynn, a former managing director of News International, would take over from the outgoing chief executive Fred Hilmer. Fairfax is supposedly negotiating to buy a stake in Ten Network Holdings.

Aegis recently took court action against KR Media, in which WPP Group has a 20 per cent stake, alleging that it had poached clients of its Carat subsidiary. A judge ruled against Aegis, but it plans to appeal.