It’s been a rollercoaster week in media. In the world of the advertisers, it seemed just like old times as the barbarians came knocking once again at the door, with Kraft bidding for Cadbury and T-Mobile agreeing a mobile merger with Orange.

Meanwhile, the government is to reconsult on product placement, and the Office of Fair Trading has ruled out substantive changes to Contract Rights Renewal (CRR). And all while ITV and Channel 4 hunt for new chief executives. In more TV news, chairman of the BBC Trust, Sir Michael Lyons, and the new culture secretary, Ben Bradshaw, have had a very public falling out over the trust’s conflicting role as both cheerleader and regulator for the Beeb.

Finally, in the music sector, a breakaway group of artists urges ministers not to prosecute illegal file-sharers.

At first glance it appears that there’s no connection between these disparate events. But look closer and there is a common thread here: each company is trying to position itself correctly for the next stage of the economic cycle, and as they do so, sector coherence is collapsing as individual companies seek early advantage. We’ve moved from a consensus that immediate survival through the downturn is the top priority for all, to disagreement about each company or sector’s role during the upturn.

Take Kraft’s bid for Cadbury. In the long-term, this is all about the end-game in global confectionery. For two decades, privately controlled family companies – like Hershey’s, Mars, Wrigley and Ferrero – have stymied attempts to consolidate a sector around the multinational food giants. The major round of acquisitions which saw Nestle take Rowntree, and Kraft pick up Terry’s and Suchard have not yet thoroughly played through to final shake-out in the industry.

Since then, Mars and Wrigley have joined forces, and now the potential of a Kraft-Cadbury deal puts Nestle and Hershey’s in the position of deciding whether to do a deal together (this has so far proved beyond the wishes of Hershey’s board of trustees) or intervene in the Cadbury-Kraft battle.

Some may remember that Nestle was originally the white knight in the fall of Rowntree after a hostile bid from Jacob Suchard; perhaps it could yet play the same role for Cadbury against the assailing Kraft? I suspect competiton issues will preclude it taking such action this time around, but regardless of that, Nestle may well decide that its best opportunity will come from watching the two focused and successful UK competitors – Kraft in coffee and Cadbury in chocolate – implode together.

Developments in the TV sector are also about the end-game. All channels are wrestling with the future balance between public service obligations and commercial viability. But as events play out, they are resembling the storyline of a soap opera: the chairman of ITV doesn’t want a new CEO, while the chairman of Channel 4 doesn’t want the current CEO. Tony Ball wants ITV but doesn’t want the board. The government doesn’t want product placement but then again … Tune in next week for the latest episode.

The unsettled situation in commercial television is rattling the BBC. In the past few days alone, we’ve heard conflicting views, in public, from each of the BBC leaders – chairman Lyons and director general Mark Thompson – as well as culture secretary Bradshaw and his shadow Jeremy Hunt. This is what normally happens privately over the lifetime of a parliament. It’s ended with the BBC acknowledging at last that it’s open to questions on the future scale and remit of the Beeb.

Some may remember that Nestlé was originally the white knight in the fall of Rowntree after a hostile bid from Jacob Suchard; perhaps it could play the same role for Cadbury against the assiling Kraft? Competition issues aside, Nestlé may well decide that its best opportunity will come from watching the two implode together.

As it does so, it is playing its last trump card: mobilising research with the licence fee payer (aka the voter) in its support against the politicians. But that’s a risky card to play: while the public loves BBC content, opinion is divided on whether the licence fee would be supported if it were a voluntary subscription rather than a compulsory tax.

For once, you might think the usually conflicted music industry would look joined up against this backdrop. But just as the Digital Britain Bill limps to the finishing line with proposals on music piracy and illegal file sharing, up pops a new coalition of famous artists sticking up for the teenagers against the record labels. Even in the music sector – perhaps the sector most transformed by digital delivery – tensions remain between the content creators and the distributors as to the best way to secure revenues and rights in the future.

No company or industry is immune to a changing world. We need to see sectors align themselves behind a common future. But getting everyone to work together imaginatively for their future in the upturn is likely to prove more difficult than getting everyone to agree on the fight for survival in the downturn. 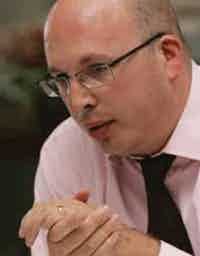