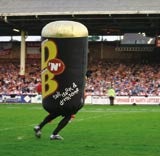 The Rugby Football League (RFL) has signed up soft drinks manufacturer AG Barr as its official partner. The two-year deal will see the company’s D’N’B drink used as the headline brand.

The tie-up, which is worth &£500,000, will allow AG Barr to use RFL images across its advertising, including point-of-sale and on-pack promotions. It will also be a key advertiser at big matches.

AG Barr believes rugby league is a “natural fit” for D’N’B as both appeal to all ages and share strong northern roots.

The deal was tested last year through match sponsorship of two Super League fixtures. AG Barr brand manager Steven Downham says/ “That experience provided a sound argument for this radically increased level of support. We think D’N’B can be the taste of rugby league.”

The drinks company will also use the sponsorship to promote its other brands.

The deal represents the company’s biggest investment to date in its dandelion and burdock brand and will be the driving force of a major distribution push for D’N’B in 2006.