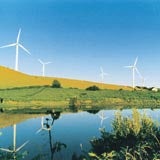 Agency Republic, the new media arm of Claydon Heeley Jones Mason, has won the digital account for environmental charity Friends of the Earth after a six-way pitch.

A campaign developed by Social Republic, Agency Republic’s social marketing division, starts at the beginning of July, focusing on recruiting donors. The ad uses rich media to let viewers transform an image of a polluting chimney-stack into a clean-energy wind turbine. Copy supporting the imagery conveys the message that in reality there is no magic wand, but by joining Friends of the Earth people can make a difference.

The ad will be appearing on a range of major portals including AOL, MSN and Yahoo! as well as other targeted sites including channel4.com, New Scientist and The Economist. Media buying is also being handled by Republic.

Friends of the Earth internet fundraiser Peter Taylor says: “This puts us at the forefront of charity marketing. We wanted to test online marketing as a method to recruit supporters, and this creative will hopefully capture a cold audience’s imagination.”

Taylor added that the charity’s online strategy had been drawn up a year ago by specialist consultancy Think, which had also helped to put together the brief, devise the shortlist and select the eventual winner of the pitch.