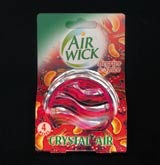 Reckitt Benckiser’s Airwick is to launch a line of battery-powered household airfresheners in a bid to raise the competition with SC Johnson’s rival Glade range.

The MobilAir range, which will be brought out under the company’s flagship Airwick banner, will be available from June. The launch will be supported by a &£5m TV, print and outdoor ad campaign.

One industry source says the range of airfresheners will be promoted as the most effective on the market.

“The range looks very good and the battery power means it works very well,” he says.

He adds that the range’s premium positioning and the need to pay for additional batteries might discourage some consumers. Several new fragrances are also expected to be introduced as part of the launch.

Airwick is part of a portfolio of 15 “Power Brands” from which Reckitt Benckiser aims to derive 50 per cent of its revenue by next year.