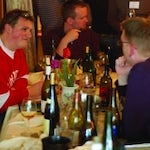 Last year’s 6% dip was the fourth annual decline in five years – 2007 was the anomaly.

UK drinkers are now consuming 8.4 litres per head of 100% alcohol – 13% less than in 2004. Indeed, UK consumption remains below the average for the EU.

Total beer spend is £17 billion per year – 41% of all spending on alcohol, according to the BBPA. Of this £13.5 billion is spent in the on-trade, and £26.5 billion in the off-trade (shops and supermarkets)

BBPA chief executive Brigid Simmonds says the figures show “the vital role beer and pubs play in the UK economy”, and would also “confound many pundits, as yet again they confirm that as a nation, we are not drinking more”.

There are suggestions the figures show a change in attitudes towards alcohol consumption on the back of a number of campaigns.

The latest starts next week with the drinks industry set to commence a £5m outdoor campaign dubbed “Why let the good times go bad?”, part of its £100m social marketing campaign aimed at changing young people’s attitudes towards drunkenness. More than 40 of the biggest alcohol producers and retailers are involved, as well as Coca-Cola.

A report by Mintel earlier this year also showed that the sales mix of the typical pub is shifting steadily away from alcohol and towards food, although alcohol still represents nearly half of the turnover of the average pub. Food sales have been more resilient and now represent nearly a third of pubs’ sales, while soft drinks have also outperformed alcoholic drinks in recent years.

Plans by the Scottish Government to introduce a minimum price of 45p per unit of alcohol as part of the Alcohol Bill have been attacked by industry today as having little impact on public health.

Medical bodies and the Government’s own health advisors NICE back minimum pricing but most supermarkets and producers oppose it, arguing that it would unfairly penalise responsible drinkers. Tesco, however, has said that it would support the policy if the Government decided to introduce it.