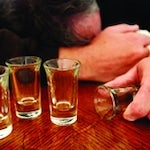 However, the industry believes that a minimum price would have little impact on public health and would penalise the majority of responsible drinkers.

Diageo, maker of Guinness, Smirnoff and Baileys, says: “”Minimum pricing is wrong in principle. It is not the answer to tackling problems with alcohol misuse.

“By its very nature, it will impact all consumers, the majority of whom enjoy alcohol responsibly without harm to themselves or others.”

Richard Taylor, director of corporate affairs at Morrisons, says the plan will “only serve to punish our customers in Scotland, the vast majority of who drink responsibly.”

The Scottish Government believes that a minimum price would help save the health service millions it incurs from having to deal with alcohol-related injuries.

Nicola Sturgeon, health secretary, says: “Getting the price right is vital for minimum pricing to work – too low and it will simply be ineffective. After careful consideration, we believe that 45p per unit is the right price.”

Opposition parties, that together hold a majority, have vowed to have minimum pricing removed from the bill at a later date.

The coalition Government in Westminster has so far ruled out minimum pricing but does want to see an end to the sale of alcohol below cost price.

It is currently consulting with industry in the hope of defining “below cost”.