With a year to go until the Rio Olympics, Aldi has unveiled its plans to support Team GB over the next 12 months and believes the campaign plays to the continued success of the retailer in the UK.

Zavalis told Marketing Week that “from a sporting entity we are on the up and we’re a winner”, adding that while other retailers might need to embark on this kind of sponsorship “as a defensive mechanism” its tie-up felt like a natural fit for Team GB.

Aldi’s sales continue to grow, the latest share figures from Kantar Worldpanel for the 12 weeks ending 19 July revealed that Aldi grew by 16.6% to a new market share high of 5.6%.

The discounter is also investing £600 million in the UK over the next two years. It currently employs 27,000 people and will create 35,000 new jobs as it develops its head office and opens new stores and distribution centres across the country.

However, for Zavalis the retailer’s success story in the UK is just one of the aspects that Team GB considered during discussion for the sponsorship deal. The marketing campaign, which kicks off today (5 Aug), also sees Aldi pushing its British credentials by promoting “fresh, affordable, Great British food”.

“We are foreign-owned but for all intents and purposes we are a British company,” he said. “Team GB saw a company with a HQ in the Midlands, headed up by a British CEO and a British-based buying team.”

Aldi is celebrating 25 years in the UK and is looking to further its place in the British economy. Zavalis said that the campaign line of “championing the great, and great British quality” is what Aldi has done for the last 25 years, although he added that the retailer might not have told that story as well as it could.

“It was important to tell our contribution to the British economy story but also what are we doing for British consumers. The mission has always been to provide every person and family in the UK with fresh affordable, healthy food.”

It includes the launch of an online TV platform, The Taste Kitchen, which will share the healthy diets of the six ambassadors and show how people “can eat like an athlete”.

Zavalis said: “It’s important to have that authentic narrative, if these elite athletes are consuming healthy food to help them on the biggest stage in the world, then hopefully that sends a message that its good enough for families up and down the country.”

To get its message out to the younger consumers, Aldi is supporting the British Olympic Association’s education programme with a new initiative called “Get Set to Eat Fresh”, which will champion healthy eating among 25,000 schools nationwide. It will include producing content for social media and print and video materials to be downloaded by teachers at each school.

In addition Aldi is supporting Team GB’s Homegrown Heroes, which aims to encourage the public to get behind their local Olympic hopefuls as they train for the chance to represent Team GB at the Rio 2016 Olympic Games. 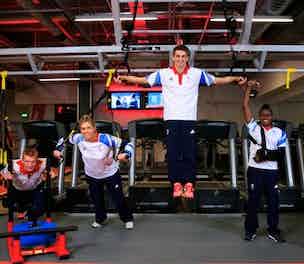 Fitness First is using its tie-up with Team GB to launch a range of workouts inspired by the training techniques of gold medal-winning athletes including boxer Nicola Adams and cyclist Ed Clancy as it looks to prove its fitness credentials and motivate more people to get involved with sport.