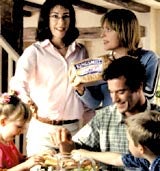 Brindle recently quit the baking giant, which has brands including Allinson, Kingsmill and Mighty White, and has not been directly replaced.

However, Allied has appointed a commercial director, Bart Della Mura, to oversee marketing for the time being.

A spokeswoman for Allied says Della Mura will decide on the future structure of the marketing department and consider whether a replacement for Brindle will be appointed.

As Marketing Week went to press, the company was unable to comment further on Brindle’s new role and she was unavailable for comment.

In 1999, the company enlisted Channel 4 presenters Mel and Sue to front an ad campaign for Kingsmill Tasty Wholemeal, created by Publicis. The &£3m campaign backed the launch of the brand and was Mel and Sue’s first venture into advertising.